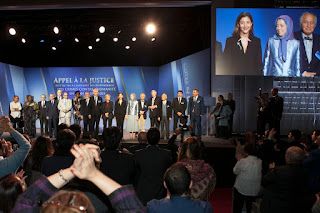 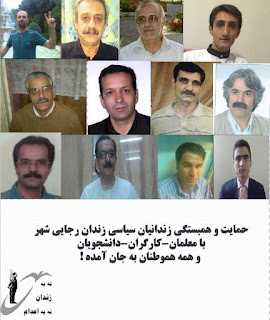 NCRI - On Saturday November 26, a group of political prisoners in Iran in a letter addressing the organizers, guests and participants in a conference held on Saturday in Paris that called for accountability of the perpetrators of the 1988 massacre in Iran. The following is the excerpts of the letter:
“Salute and greetings to all organizers, fellow participants and particularly guests form across the world,
This conference which is held to strengthen the movement for seeking justice for the massacre (of political prisoners) in the summer of 1988 in Iran shows the desire of Iranian people for the elimination of tyranny and establishment of freedom and democracy.
The product of overthrow of the religious dictatorship in Iran does not only directed toward people of Iran, but also does good and rightness for the region and human society and the failure of fundamentalism in the region.
We, political prisoners, understand more than anyone else the need for such justice seeking. Today, we still face the wave of executions because that crime and massacre was not accounted for.
Dear friends,
Every day when the prisoners are taken to the gallows and executed, it is as if we are also hanged with them and we have to endure bitterly every moment of these crimes while unable do anything about them…
We wish we could meet closely with you libertarian and humanitarian friends.
Now that there is an opportunity prepared for us, we would like to tell you about our heartfelt wish and thank all of you the libertarians, parliamentarian figures and jurists and all friends of the Justice Seeking Movement. Our wish is the same as what the families of the massacred political prisoners want which is expressed repeatedly by Mrs. Rajavi and that is accountability and trial of the masterminds and perpetrators of this “crime against humanity” most of whom are unfortunately hold government positions including Ministry of Justice (in Rouhani’s cabinet).