Paris Conference: Call for Justice; Ending Impunity for Perpetrators of Crimes Against Humanity in Iran, Syria 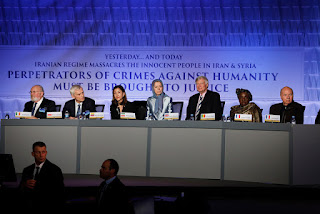 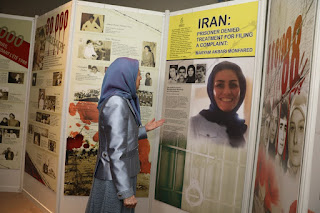 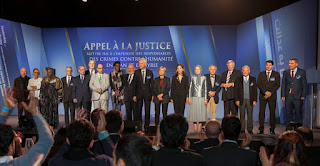 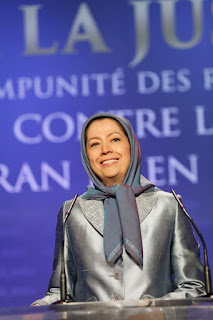 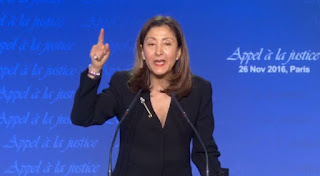 Paris Conference: Call for Justice; Ending Impunity for Perpetrators of Crimes Against Humanity in Iran, Syria

Maryam Rajavi: The international community must end its silence and inaction vis-à-vis the mullahs' crimes in Iran and the region
Any solution seeking to end Daesh is conditional on complete eviction of the Iranian regime from the region, particularly from Syria. The people of Iran loathe this filthy war and stand by the people of Syria.
NCRI - A conference called, "Call for Justice: Ending Impunity for Perpetrators of Crimes Against Humanity in Iran and Syria" was held on Saturday, November 26, 2016, in the Mutualité conference center in Paris, in the presence of the Iranian Resistance's President-elect Maryam Rajavi.
A number of distinguished political personalities and jurists from France and Europe, representatives from Middle East countries, as well as a number of officials of the Syrian Opposition participated in this conference.
In her speech, Mrs. Rajavi described the US policy as being disastrous for the people of Iran and the region in the past 16 years because it gave the greatest support to the clerical regime in Iran. With the new administration taking office, the Iranian people and Resistance and the people of the region expect the US to revise its policy, she said.
Maryam Rajavi reiterated: In the present crisis in the region, any solution seeking to ultimately end war and insecurity, and specifically address the problem of Daesh (ISIS/ISIL), must consider terminating the regime's meddling in the region, particularly in Syria. Nothing is more catastrophic than collaborating with the Iranian regime to fight Daesh because it would strengthen the Iranian regime and its terrorism, and would nourish Daesh, politically and socially. Although Khamenei attempts to justify the regime's continued invasion of and carnage in Syria by absurd rhetoric of defending its Holy Shrine, the people of Iran detest this filthy war and stand by the courageous and proud people of Syria.
Mrs. Rajavi said: Everyone recalls how much the six world powers, especially the United States, gave in to the regime's demands during the nuclear talks, contenting to just a single retreat. At the time, I warned against giving such unjustified concessions to the mullahs which forsook implementation of the UNSC resolutions and complete termination of the regime's nuclear project. This very agreement, however, which could provide a way out of the regime's crises has turned out to be counterproductive. Poverty and hunger haunt our people more than ever, and the regime's internal factions have begun settling their accounts. Today, the mullahs are no longer able to contain their own internal factions or the social protests, as they previously did. The Velayat-e Faqih regime is in difficult straits from every respect but the road to regime change and the establishment of a pluralist republic based on separation of religion and state, abolishment of the death penalty and women's equality is more accessible than any other time.
The Iranian Resistance's President-elect said: Our expectation and the expectation of the people of the Middle East is that the international community stop its policy of giving concessions to the Velayat-e Faqih regime and end its silence and inaction vis-a-vis the  regime's crimes in Iran and the region. Instead, we expect them to respect the Iranian people's struggle for freedom and the desires of the peoples of the region.
The conference was moderated by Ms. Sylvie Fassier, an elected representative of the people of France.  Former Columbian Senator and presidential hopeful Ingrid Betancourt; Fatoumata Diarra, judge for the International Criminal Tribunal for the former Yugoslavia (ICTY) and the International Criminal Court (ICC) until 2003; Senator David Norris, former presidential candidate from Ireland; Marcin Swiecicki, former Mayor of Warsaw; Sir Geoffery Robertson, President of the UN Court for Sierra Leone; Florence Berthout, mayor of the 5th District of Paris; Bishop Jacques Gaillot from France; and Tahar Boumedra, former chief of UNAMI human rights office in charge of the case of Ashraf; were among the speakers.
A major part of the program was devoted to Syria and the situation in Aleppo. Former Algerian Prime Minister Sid Ahmed Ghozali, former Jordanian government spokesman and Information Minister Saleh Qallab; Haitham Maleh, a Syrian opposition leader and chair of the Syrian Coalition's Legal Committee; Michel Kilo, a member of the political bureau of the National Coalition of Syrian Revolution and Opposition Forces; Judge François Colcombet from France; Anwar Malik, author and international human rights monitor from Algeria; Brita Hagi Hasan, chair of the City Council of Aleppo; and Fadel Abdul Ghany, director of the Syrian Human Rights Center spoke in this part of the conference.
A number of former political prisoners and young PMOI supporters who have recently left Iran also attended the conference and explained their experiences and observations on the omnipresent repression in Iran and the activities of the PMOI inside the country.
An exhibition displaying images of some of the victims of the 1988 massacre of 30,000 political prisoners in Iran was visited by participants in the conference.
Secretariat of the National Council of Resistance of Iran
November 26, 2016