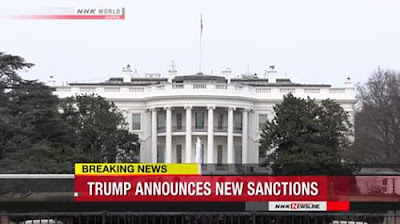 NHK NEWSLINE, 23 Feb, 2018-- The United States has announced that it is imposing the largest ever set of sanctions against North Korea.
56 vessels, shipping companies and other businesses suspected of assisting North Korea will be subject to the measure.
North Korea is suspected of violating UN sanctions by moving contraband by ships at sea.
The US move is aimed at preventing such offshore transfers and heightening the effectiveness of the global body's sanctions.
The US is thought to be taking the measure to show that it is stepping up pressure against the North.