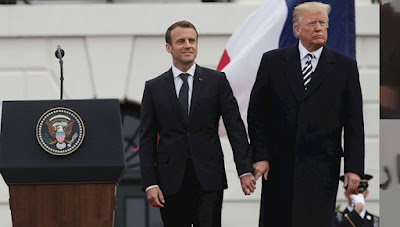 Washington, PMOI, April 26, 2018-- French President Emmanuel Macron said he believes U.S. President Donald Trump will exit the Iran nuclear deal, delivering a crushing a blow to the Iranian regime’s hopes of continuing to live off an accord that has rendered nothing but a regime causing even more havoc inside the country and throughout the Middle East.
“My view — I don’t know what your president will decide — is that he will get rid of this deal,” Macron told journalists Wednesday in Washington. It is worth noting how Macron, during his three-day visit to Washington, went the limits to encourage Trump to stay in the accord, formally known as the Joint Comprehensive Plan of Action.
Iran’s concerns are increasing as Macron spoke of “a period of tension in such a scenario,” adding how Trump believes “this period of tension could be fruitful because it could push them to move."
Macron’s remarks came a day after he proposed a new framework seeking to address many of Trump’s concerns regarding the deal, which he has recently dubbed as “insane” and the “worst deal ever.”
Only minutes into their Oval Office meeting on Tuesday, Trump blasted the existing agreement as “terrible,” “insane,” and “ridiculous.” Trump went on to threaten Iran with “a price like few countries have ever paid” if the Tehran government restarted their nuclear program in response to an American withdrawal from the accord.
Macron and European leaders consider maintaining the U.S. in the JCPOA, reached during the Obama administration, a priority before the May 12 deadline. Only in such a scenario would Trump continue to waive pre-JCPOA American sanctions lifted as part of the agreement.
German Chancellor Angela Merkel is scheduled to arrive in Washington on Friday, aiming to reiterate Macron’s message of staying in the JCPOA. Making things difficult for the Europeans, however, are two of Trump’s key foreign policy advisers -- new National Security Adviser John Bolton and his recently approved secretary of state, Mike Pompeo – two figures known for their strong stance against the Iranian regime and vigorously opposing the JCPOA from day one.
Some hope came for the pro-JCPOA camp when Trump seemed to some extent welcome Macron’s new blueprint, using terms such as a “new deal” with “solid foundations.” American and European diplomats have discussing the new accord for weeks. Yet as Macron experienced, their main obstacle remains Trump’s refusal to provide any guarantee the results will be accepted.
Any yearning Trump may have had for Macron’s proposal -- and their close ties Tehran counted on desperately -- failed to overcome Trump’s firm opposition to the existing agreement.
Trump has long demanded tougher penalties on Iran’s existing bellicosity, especially its ballistic missile program and Tehran’s malign influence in the Middle East.
Some analysts thought – and the pro-appeasement Iran apologists hoped – that unprecedented talks with North Korean leader Kim Jong Un may actually sway Trump to preserve the agreement.
Iranian Foreign Minister Mohammad Javad Zarif, sensing the tough times ahead for his regime, attempted to saber-rattle and warn Trump that his signals were canvasing an untrustworthy image of the U.S. His words are falling on deaf ears as it is quite obvious how Tehran will suffer endlessly in a post-JCPOA world.
Iranian Supreme Leader Ali Khamenei understands best how an end to the JCPOA will signal the return of crippling sanctions, a new focus on its meddling abroad and ballistic missile program.
Khamenei has been interestingly silent on the JCPOA’s future, considering the coupling of this crisis with increasing protests across the country. These crises have the potential of bringing this regime to its knees.