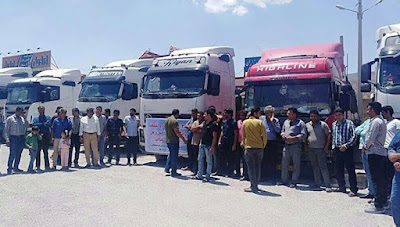 May 24, 2018 - The unprecedented nationwide strike launched by Iran’s truck drivers across the country entered its third day on Thursday.

Truck drivers are protesting poor living conditions and increasing commissions demanded by authorities. Thousands of truck drivers are refusing to transfer loads or accept new loads, as this movement is already sweeping 93 cities in 25 provinces throughout Iran.

A number of these cities include:

Darab on the third day of the strike - May 24th

Last week truck drivers staged a number of rallies protesting low wages and their jobs’ limbo status. These protesters have for years seen their problems continue without any resolve and no care provided for their needs.
These drivers are at times forced to wait up to 20 days for their next load. The regime’s Tax Organization has also been imposing new taxes even against these drivers.

Iranian regime officials have been attempting in some cities, including Isfahan, to increase the drivers’ wages in an attempt to separate their protesting ranks. The drivers, however, are refusing to budge on their demands.
In Bandar Anzali of Iran’s northern Gilan Province, authorities issued a statement claiming wages have been increased from 12 to 17 percent. The drivers, however, neglected this attempt by the authorities also.
Other reports indicate regime authorities have said wages will be increased by 20 percent, only to be rejected again by the drivers who are demanding a 50 percent increase in their wages.
On May 22nd, on the first day of the truck drivers’ strike, Iranian opposition leader Maryam Rajavi hailed the protesting truck drivers’ perseverance and high spirits, while calling on all Iranians to show their support for this movement.