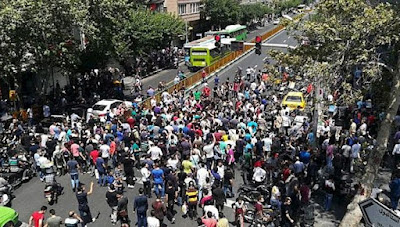 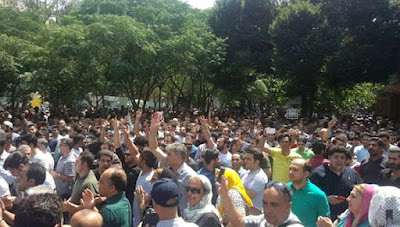 June 26, 2018 - As protests erupted in Tehran and other cities of Iran on Monday after
the rial took another plunge, one thing was evident: The people of Iran are fed up with the regime, and they’ll use every opportunity to make it clear that they want regime change.
The merchants of Tehran went on strike and triggered protests and marches that quickly overtook the city. Within hours, protesters in the streets of Tehran were chanting, “Death to the dictator,” and “Death to Khamenei,” the supreme leader of the Iranian regime.
Mrs. Maryam Rajavi, the president-elect of Iranian opposition coalition National Council of Resistance of Iran (NCRI), saluted the brave marketers for their uprising and emphasized that, “The exchange crisis and unprecedented high prices, which has imposed a burdensome pressure on the overwhelming majority of the people of Iran, is the outcome of the policies of the ruling religious fascism.”
The slogans of Iranian protesters reflect Mrs. Rajavi’s remarks. “Leave Syria, think about us,” the protesters chanted, challenging the Iranian regime’s plundering the country’s wealth on propping up the regime of Bashar al-Assad. The regime also continues to spend billions of dollars on its ventures in other countries, as well as its ballistic missiles and nuclear program. Tehran also earmarks huge sums for its security and repressive forces, which it unleashes on protesters when they rise up to reclaim their rights.
With every new chapter in the ongoing protests that started at the turn of the year, the Iranian people are becoming bolder in their confrontations with the Iranian regime. In yesterday’s protests, the people chanted, “Beware the day we pick up arms,” threatening to exact revenge on the repressive forces of the regime which have been cracking down on protesters for four decades.
Since yesterday, the regime has ramped up its repressive measures. On Tuesday, security forces sabotaged and destroyed the belongings of the people to later blame it on protesters and turn the people against each other. They have also attacked the protesters in different parts of the city. But the Iranian people, relentless in their protests, are determined to retake their right to freedom.
The Iranian opposition will hold a grand rally on Saturday in solidarity with the uprising of the Iranian people and in support of regime change in Iran. Called Iran Freedom, this is the largest gathering of the Iranian diaspora, held every year in Paris, France. The event will host many political figures, religious leaders and other prominent personalities who will voice their support for the plight of the Iranian people and the Iranian opposition.