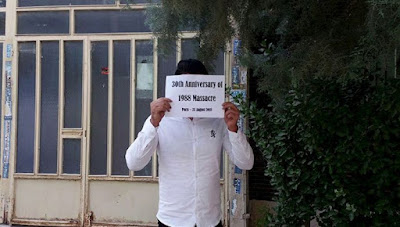 Iran, Aug. 26, 2018 - Victims of the 1988 massacre in Iran, among the over 30,000 political prisoners executed by the mullahs’ regime simply for pledging loyalty to the Iranian opposition People's Mojahedin Organization of Iran (PMOI/MEK) are being remembered these days by members of resistance units across Iran.
Some perpetrators of this horrific tragedy are currently serving in various posts of the Iranian regime. They intended to completely uproot the PMOI/MEK, only to see that even 30 years later, those very martyrs are now the inspiration of a new generation in this ongoing struggle by the Iranian people to establish freedom in their country.
Iranian opposition President Maryam Rajavidelivered a message at an international conference held in 20 cities across Europe and North America marking the 30th anniversary of this historic crime against humanity.

Members of a resistance unit in Kermanshah recorded a message outside the mullahs’ intelligence office in this city saying: “… we hope the perpetrators of this genocide are held accountable in an international tribunal through a just process. As the people know, the officials responsible for this vicious massacre are currently among the highest ranking posts in this regime and actively participate directly in the quelling of any protests… Death to Khamenei, May Khomeini rot in hell, Long live the National Liberation Army of Iran, Viva freedom, hail to Rajavi…”

Members of another resistance unit said, “We are PMOI/MEK supporters and will continue the struggle of the 1988 massacre victims for regime change and bringing about the freedom to this country. Death to Khamenei, Hail to Rajavi.”

Another resistance unit in Kermanshah put up placards reading, “We are PMOI/MEK supporters and will continue the struggle of 1988 massacre victims for regime change and a free Iran.”

Members of a Tehran-based resistance unit put up 1988 massacre posters with the #1988Massacre hashtag, pledging to continue their struggle.