Increasing Poverty in Iran: “Finding Food Has Become a Challenge 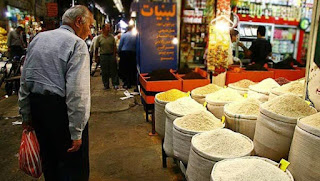 Increasing Poverty in Iran: “Finding Food Has Become a Challenge

Iran is one of the world’s richest, in terms of natural resources; with its gas and oil reserves being the second and third largest, respectively.

Moreover, it ranks the first, second, ninth, tenth, and eleventh, for its Zinc, Copper, Iron, and Uranium, respectively.


With just 1% of the world’s population, at least 7% of the world’s mineral resources are in Iran. Which would mean that Iranians should all be living a comfortable life now. But this can’t be further from the truth.
Majority of Iranians are living in extreme poverty and struggling to meet their every day needs. Which is reflected in the ongoing protests, especially the most recent ones; where people are seen complaining about their difficult lives, in some of the state’s own media platforms.
A resident from Tehran for instance, was recently (September 6th, 2018) asked on TV about his monthly income and whether he could afford his daily needs, to which he replied: “I usually earn 30,000 Toman a day, but sometimes just 21,000 a day”; adding that “we can’t even afford a single bread; if we’re lucky enough, we spend some of our savings to buy some cheese too, but we haven’t been able to afford even as little as 100 grams of meat or poultry ever since the New Year”.
In another interview held on the 22nd of August, Azerbaijani workers were also seen complaining about the prices: “everything has gone up in price by 100%! No one can even afford a single bread. I, as a retiree, only earn 400,000 Toman a month (equivalent to 30-40 dollars) and can’t do anything with this income”.
Another ordinary citizen comments: “many of us feel ashamed to go home empty-handed every day, to our wives and children; we haven’t worked for over a month, and it’s been at least 2-3 months that we haven’t been able to afford even fruits for our households. If it wasn’t for my wife and children needing me, I would’ve killed myself by now. Look how old I and this guy next to me look! How old do you think he is? He’s only 35-38 years old! Look how badly we’ve aged with all this pressure!” (September 6th, 2018; Channel 1)
The crisis Iran is facing now is not only indicated by the ongoing protests especially over the past several days, but also admitted by many authorities themselves, such as Amir Mohebian, a theorist from Khamenei’s regime itself: “With the growing frustration in people these days, a 7.5 Richter earthquake seems to be on its way now!” (September 7th, 2018; Channel 4).
مطالب   مارا در وبلاک خط سرخ مقاومت   ودر توئیتربنام @bahareazady   دنبال کنید