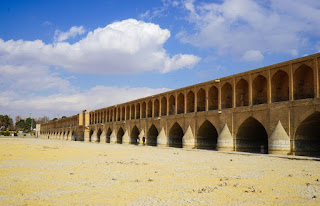 London, 20 Sep - The people of Golpayegan in the Isfahan Province of Iran have been dealing with major problems in terms of agriculture. Their land that used to have wonderful natural springs is now useless. Agricultural activity has all but stopped because the land is barren and is incapable of producing what it once used to.
This is all because of the Ghaed Bassir Petrochemical Plant. The plant produces Acrylonitrile Butadiene Styrene (ABS) and Styrene Acrylonitrile Copolymer (SAN) resins according to the petrochemical owning company.
The company claimFrrs that the management of the plant is based on principles of environmental consciousness and says that it always places environmental considerations before business ones. The official website of the plant explicitly states that the plant has strict measures in place for the disposal of waste.
However, the environmental situation in the villages immediately surrounding the plant tells a different story. The state-run news agency IRNA also paints a different picture. It said that the people in the surrounding areas have lost everything. Its report indicates that the company owning the plant has dug hundreds of deeps wells that have taken water from the areas close by.
Not only has the water been contaminated with waste toxins from the plant but the smoke produced by the plant is contaminating the air. Furthermore, the sewage from the factory is sent to a waste system that is located right next to sources of drinking water for the local people.
The news agency tried to speak to officials from the plant but they got no answers to their questions. A representative said that they were unable to speak about the issue because they had not been granted permission.
The Supreme Leader of Iran, Ayatollah Ali Khamenei oversees the running of a large organisation named the Tadbir Energy Development Group via the Execution of Imam Khomeini’s Order (EIKO). This company oversees Ghaed Bassir Petrochemical Plant.
The people of Golpayegan have endured great suffering because of the negligent and dangerous practices of the plant.
The report included interviews with a number of people including officials from the plant and people from the surrounding villages. A man said that the people in the area have received no help whatsoever when they bring up the problems that they have faced for more than two decades. Another man explained that the water tastes distinctly strange.
An elderly woman explained: “A water pipe that went through our yard, they wouldn’t let us use any of it. We have to drink contaminated water. The petrochemical plant has lots of smoke. At nights, we can’t lie down or sit. When you close the doors it gets too hot. When you open them, the smoke comes into the house. I was sitting here last night and I was about to suffocate from the smoke.”
Another local person also said that the amount of people getting cancer is rising, even among children.
Unfortunately this is just another incident in which the corruption and neglect shown by the Iranian regime is adversely affecting the people of Iran. Nothing will change the nature of the regime – it is interested only in self-preservation.