Acknowledging Iran’s regime has no future 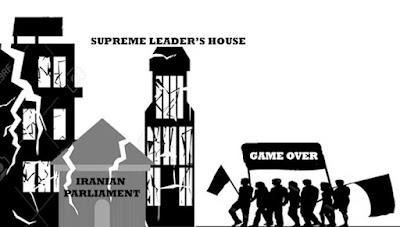 Acknowledging Iran’s regime has no future

Iran, Oct, 5, 2018 - Remarks heard from Iranian regime officials in regards to the dilemmas facing the mullahs’ apparatus has reached a critical point. If these comments were expressed just a year ago, they would be considered a crime, and literally opposing the state and Iranian regime Supreme Leader Ali Khamenei himself.
These remarks, however, have become very common these days.
Various figures are questioning the very essence of the mullahs’ regime and their so-called constitution. Tajzadeh, the interior minister’s political deputy during the tenure of former president Mohammad Khatami, is placing his cross hairs on the position of the Supreme Leader itself.
“The first and biggest mistake of all… was including the supreme leadership position in the constitution… the revolution steered away from being a republic to more of a despotism. In the constitution, we have provided vast authority to the supreme leader, without holding the individual accountable… This is enough to make the entire political system completely ineffective,” he said.
These remarks actually signal the regime’s deep concerns regarding the boiling domestic unrestand the intensifying international isolation. The fact that such individuals, who were screened vigorously before being appointed as senior regime officials, are resorting to such remarks is quite telling about the weak status quo of senior officials and the entire regime apparatus.
“Resolving the crisis of our entity lacking a future and resolving fears about the future cannot be realized through promises, speeches and/or reports. Today, relieving remarks made by political figures and directors are no longer effective,” Iranian regime figure Jabbar Rahmani said, according to the state-run IRNA news agency on October 1st.
Faeze Hashemi, the daughter of former Iranian president Ali Akbar Hashemi Rafsanjani (now dead), also made interesting comments to EuroNews.
“We cannot run the country with policies dating back to the first years after the 1979 revolution… the status quo has become so critical that Mr. Mesbah Yazdi (a senior mullah close to Khamenei) says we have less than five friends across the globe,” she said.
Ali Younesi, a former intelligence minister, has recently questioned the epicenter of all the policies stated in the regime’s constitution.
“I suggest to those in the Intelligence Ministry to not stand against the people. Inside the country, be very careful to avoid taking measures against the people,” he warned.
All these figures agree on the one subject of a major restructuring necessary in the regime’s ruling apparatus.
“Methods and policies must change, and reforms are needed in the state’s structure,” according to former Iranian regime president Mohammad Khatami.
Faeze Rafsanjani also acknowledged, “We must accept the fact that we made mistakes. If the policies were correct in the past, they’re not so now. We have no other choice.”
“The harsh truth is that the society can start crumbling. This can be realized very quickly,” said Rahmani.
During the past year, and specifically after the Dec/Jan uprising to this day, a variety of figures inside the Iranian regime have been voicing such concerns. Ever since the people began rebuking the mullahs’ regime in its entirety, and especially targeting Khamenei himself, these figures have started to realize that their days are numbered.
The mullahs’ regime in Iran is fundamentally against the people and cannot be reformed. In their street protests during the Dec/Jan uprising, the Iranian people were heard specifically chanting:
“Reformists, principalists, GAME OVER!”
This medieval and repressive regime will be overthrown by the protesting Iranian people and Resistance Units linked to the Iranian opposition People's Mojahedin Organization of Iran (PMOI/MEK).