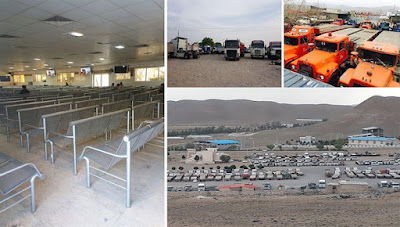 Iran, October 8, 2018 - Truck drivers across Iran are continuing their nationwide strike and marking the 15th consecutive day on Sunday. The truckers’ strike, beginning on September 23rd, has spread to over 310 cities across Iran.
Reports indicate Iranian regime authorities have to this day arrested around 250 of the protesting drivers. Despite these repressive measures and other threats, the truck drivers are braving all odds and continuing their strike and protests.

The loading station in Ahvaz of Khuzestan Province, in southwest Iran, remain closed, sources say.
The Ahvaz Steel Industries warehouse remains full of goods as truckers continue their strike in all of the country’s 31 provinces.
Maryam Rajavi, President of the Iranian opposition National Council of Resistance of Iran (NCRI), sent a message hailing the truckers’ nationwide strike and encouraging to continue their protests as their movement enters its third week.

A truck driver from Urmia in northwest Iran says the loading station was completely empty without a single driver. Normally, a large number of trucks would be seen taking on new loads. All drivers are on strike, he says, and none are accepting any new loads.

Another driver in the New Shapur district of Isfahan, central Iran, says he and all his colleagues are on strike. All the drivers are rallying outside the city loading station.

The petrochemical site in the city of Bojnord reports all drivers are strike.
In Zanjan, northwest Iran, all the truck drivers are on strike at the local loading station and not showing any signs of backing down.
In Aligudarz, western Iran, none of the drivers have accepted a new load and remain fully committed to the nationwide strike.

In Mahalat, central Iran, nearly 200 to 300 trucks with their flat-beds are parked as their drivers remain loyal to the nationwide protest movement and strike.

Read more:
Saturday signaled the 14th consecutive day of this strike launched by thousands of truck drivers, protesting low paychecks, skyrocketing prices for spare parts and tires, and authorities refusing to respond to the truckers’ righteous demands.
This strike, despite all the obstacles, has been able to continue in the face of numerous threats and plots launched by Iranian regime authorities.

In Bushsher, southern Iran, the unloading process for ships has been disrupted severely due to the truckers’ ongoing strike.

The Iranian truckers’ nationwide strike has gained media coverage in the United States, Canada, Australia and a variety of Arabic outlets.

A female driver has joined the truckers’ strike and sent a message calling on all her colleagues to continue their protests until their demands are fully met.

I
n Najaf Abad of Isfahan Province in central Iran the protesting truck drivers intended to form a column in a show of their strong will to continue this strike. Local police, however, blocked their path and prevented any such measures.

In Ahvaz, industrial steel warehouses are full and no truck are available to transfer them to their end locations.

On Friday, authorities dispatched 20 plainclothes agents to a loading station in Bandar Abbas, southern Iran, to claim truck drivers have ended their strike. However, the protesting truck drivers quickly foiled this plot by taking their own footage of the same loading station to show the site being empty and prove that the truckers are continuing their strike.
Despite all the pressures and threats resorted to by Iranian regime authorities, the strike has currently spread to more than 310 cities in all of Iran’s 31 provinces.
For two weeks now truck drivers in over 300 cities across Iran have been continuing their nationwide protests. Strikes, protests and the all-out uprising in Iran has transformed into an ongoing movement, placing its impacts on the country’s political spectrum on a daily basis.

During the past few days, despite threats and other measures resorted to by the authorities, and despite the fact that over 170 protesting drivers have been arrested, in addition to all the difficulties for those bravely joining this strike, the courageous truck drivers of Iran are continuing their protest movement, showing no sign of succumbing to the regime’s demands.
This strike, following the major Dec/Jan uprising across the country, and the major protests witnessed in August, is the third round of a nationwide movement engulfing the entire country in the past eight months alone.
It is worth noting that workers, teachers and other employees of various branches of Iran’s society are legally forbidden to establish their own independent syndicates or unions. Despite this important shortage, we continue to witness the truckers launch yet another round of nationwide protests in the past five months, protesting the plundering witnessed by the regime’s authorities.
Iranian regime officials are seen resorting to threats, intimidation and crackdown, in their attempt to canvas this issue as a security matter that shakes the regime’s pillars and demands drastic measures by the authorities to put down this movement.
Col. Kavous Mohammadi, a police deputy of Fars Province in south-central Iran, described the protesting drivers on strike as “disruptors” of order. In a TV interview aired on September 29th, he went on to say 22 drivers were arrested for disrupting order and security in the country’s roads.
Head of the so-called judiciary in Fars Province has accused the protesting truckers of “corruption on Earth,” a vaguely worded accusation that can be interpreted to pursue the regime’s interests.
Again, these measures have failed to cause any fear among the courageous truck drivers.
The truck drivers’ strike has gained the support of international bodies, including the International Transportation Workers Federation. This entity has voiced extreme concerns over the arrest of the protesting drivers. ITF specifically announces its solidarity and stands alongside Iran’s drivers in their struggle to realize their rights.
This new round of the truck drivers’ protests has significantly highlighted a few specific characteristics, including:
As a result, the regime’s resorting to threats, intimidation, arrests and even possible executions will no longer downgrade the protests seen launched by truck drivers today and people from all walks of life throughout Iran.