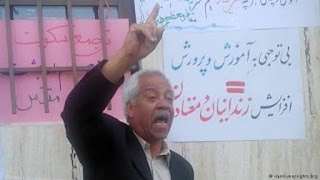 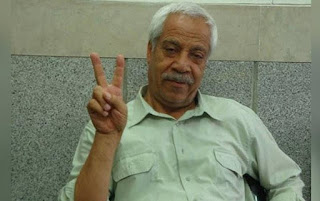 n 26October 2018.
By Shahriar Kia
It was reported last week that a number of Iranian Teachers' Trade Association members had been arrested in connection with a nationwide teachers strike that took place earlier this month. The Coordinating Council of Teachers’ Syndicates urged teachers to participate in the strike in which they were calling for reforms of the country’s education system.
Labour unions are under increasing scrutiny by authorities and it seems that those representing teachers are heavily monitored.
On Wednesday this week, Sadigheh Maleki the wife of a union leader said that her husband had gone missing under unusual and worrying circumstances. Hashem Khastar represents teachers in the Razavi Khorasan province in north-eastern Iran and he was peacefully protesting for better working conditions for teachers. He is a retired teacher.
Khastar has previously spent time in prison because of his activism in the education sector. His last stint in prison was from 2009 to 2011. As well as speaking out about the country’s education system, he has spoken out about the country’s leadership when he described Supreme Leader Ayatollah Ali Khamenei as a dictator.
Maleki’s husband went missing on the Tuesday while he was at the family’s farm not too far from Mashhad where they live. She had tried to speak to her husband on the phone but could not get through. She found his car parked near to the farm.
Obviously very concerned about her husband’s whereabouts, Maleki called local authorities to see if they had any information. She got a phone call the following day from someone who claimed to be part of the notorious Islamic Revolutionary Guard Corps (IRGC). They said that Khastar had been taken to hospital for the treatment of a mental illness.
Maleki went to the Eben'e Sina Hospital in Mashhad, very confused about the situation because her husband had been in perfectly fine health – both physically and mentally – the day before. When she got to the hospital she was told that security forces were not allowing anyone near to where Khastar was.
The authorities arrested, or rather abducted, Khastar without providing an arrest warrant. It is clear that he has been taken because of his activities rather than because of health issues. The only medication that he was on was for blood pressure – something common for a man of his age. There were certainly no signs of mental illness. It is possible that he was injured during his arrest or that the authorities wanted to sedate him as they would in a psychiatric ward.
Teachers across Iran are calling on the authorities to give information about Khastar’s well-being and are renouncing the regime for its involvement in his disappearance and ill treatment.
The people are not being deterred by the suppression of dissent. It is having the opposite effect to what the regime intended because it is making the people more determined to make their voice heard.
The U.S. State Department has voiced its support for the people of Iran too. Spokesperson Heather Nauert said on Twitter: “We are following the reports of nationwide strikes in #Iran. We support the right of the Iranian people to peacefully express their rightful demands. These strikes have a message for the regime: stop wasting Iran’s wealth abroad and start addressing the needs of your own people.”