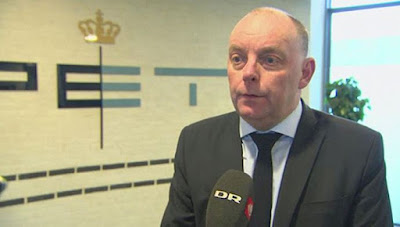 Denmark, Oct. 30, 2018 - Head of the Danish security service Finn Borch Andersen held a press conference on Tuesday, Oct. 30th discussing a major police operation resulting in a large portion of the country coming to a standstill on September 28 due to a terrorist plot blueprinted by the Iranian regime’s intelligence service, the Ministry of Intelligence and Security (MOIS).
On October 21, an Iranian-Norwegian civilian was also arrested in relation to this case.
This individual was accused of being involved in a terrorist operation inside Denmark based on orders from the Iranian regime’s MOIS.
The Danish government believes in this attack the Iranian regime’s MOIS was carrying out measures in preparation for a terrorist attack on Danish soil, according to Andersen.
The arrested individual is accused of making preparations for this intended attack.
Danish Foreign Minister Anders Samuelsen considered this terrorist plot on Danish soil as unacceptable, emphasizing the government will take action in response to the Iranian regime in this regard.
These turn of events come after France expelled an Iranian regime diplomat over a failed bomb plot targeting the Iranian Resistance’s annual convention held near Paris on June 30.

Read more:
Diplomatic and security sources cited by Reuters are saying an Iranian diplomat has been expelled by France in response to a foiled bomb plot targeting the June 30thIranian opposition rally held near Paris.
On October 2, the French Foreign Ministry issued a statement emphasizing there was no doubt the Iranian regime’s Ministry of Intelligence and Security (MOIS) was behind the plot. Paris subsequently froze all assets belonging to the MOIS and two Iranian nationals.
Paris went one step further about a month ago by expelling a Paris-based Iranian regime diplomat, Reuters added citing five sources. The individual was, in fact, an MOIS operative acting under diplomatic cover, according to two of Reuters’ sources.
A spokesman at the Iranian regime’s Paris embassy has refused to respond to Reuters’ questions over this matter. It is worth noting that Tehran initially denied any links to the foiled bomb plot and one Iranian regime official denied there had been any expulsion by France, Reuters adds.
Ties between Paris and Tehran have strained to a further extent due to this major fallout, especially considering the fact that France has been advocating to salvage the 2015 Iran nuclear deal.
Paris’ recent decision to expel an Iranian regime diplomat over this sensitive row raises attention once again to the entire dossier and signals the importance of this diplomatic issue.
Reuters cites two diplomats and one Western security source saying the expulsion of this Iranian regime diplomat is linked directly to the foiled June bomb plot targeting the convention held by the Iranian opposition National Council of Resistance of Iran (NCRI).
French, German and Belgian security services carried out a coordinated intelligence operation to thwart the planned attack in the days leading to the convention. VIPs such as Rudy Giuliani, lawyer to U.S. President Donald Trump, and several other American, European and Arab dignitaries attended the event.
On October 10, Belgium accused an Iranian regime diplomat, Assadollah Assadi, one of the two sanctioned by Paris, along with three other individuals plotting to bomb the convention.
Paris has already warned Tehran to await a robust response to the foiled bomb plot. During the U.N. General Assembly, French President Emmanuelle Macron and Foreign Minister Jean-Yves Le Drian spoke to their Iranian counterparts. This came after France demanded explanations over Tehran’s role.
Back in August, the French Foreign Ministry issued an internal memo informing diplomats not to travel to Iran, according to Reuters. The memo cited the foiled bomb plot and the Iranian regime toughening its position vis-à-vis the West.
France has also suspended the appointment of a new ambassador to Iran and has refused to respond to Tehran nominating a new envoy in France. All this underscores the sensitivity of the entire subject.
Two senior French diplomats told Reuters they expect no appointments until Paris receives detailed information on the bombing attempt.
“We are still following up with Tehran on the Villepinte affair to draw all the necessary consequences, but the political and diplomatic dialogue between Iran and France continues,” one senior French diplomat told Reuters.