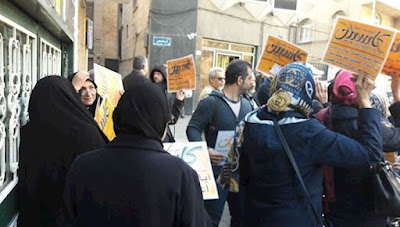 Iran, Tehran, Nov. 27, 2018 -  Clients of the Caspian credit firm, associated with the Revolutionary Guards, demanding their money be returned

Clients of the Caspian credit firm, known to be associated with the Revolutionary Guards (IRGC), held a protest rally today outside the regime’s Justice and Transparency Observatory Organization in Tehran. They are demanding their stolen savings to be returned and were seen chanting:
“Prosecution and justice must be observed”
“The bankrupt government is sitting on our money”
“Neither judges nor the government, none are thinking of the people”

Chants include:
"No to living in shame"
"We will uproot cruelty"
"We steel workers stand against cruelty & oppression"#IranProtestspic.twitter.com/yu3p04YeFj

Caspian Credit Institution gathered clients are seen rallying outside the judiciary’s office on a frequent basis, protesting the plundering of their investments by the IRGC-affiliated financial institution. The protesters demanded the return of their deposits.

“Caspian committed theft with the government’s support,” the protesters chanted.
“The money you hold is everything we have,” they also said, protesting that the government-backed institutions have ruined their lives. The demonstrators criticize government officials for giving false promises and lying for the past two years.
The IRGC affiliated Caspian has been officially recognized and authorized by Iran’s Central Bank and has absorbed the savings of thousands of Iranians across the country. However, last year, the institution filed for bankruptcy, taking away all the investments of its customers.
Caspian is one of several credit institutions with shady backgrounds and disastrous outcomes that have stolen the savings of middle-class Iranians. All of these institutions have close ties to government officials and institutions and have been running Ponzi schemes for years.
At the same time, in Mashhad, the customers of the Badr Toos, another financial institution with ties to the IRGC, demonstrated in protest to the theft of their deposits. The protesters demanded the return of their deposits.
Protestors also gathered outside a branch of the institution throughout the country, including Neyshabur in northeastern Iran. A similar protest was also witnessed in the city of Rasht.
The defunct IRGC backed Caspian Credit Institute, founded in the 1990s claiming to be a local low-interest-rate loan fund, attracted thousands of investors by paying higher interest rates but later failed to fulfill its promises.
There are hundreds of similar funds active across Iran but the regime has failed to regulate them.
The foremost demand of the protesters is to take back their money siphoned off by the IRGC-aligned institution.
Many people across the country had trusted Caspian credit institution enough to decide to invest in it, as its name had been listed in Central Bank’s official website as an authorized institution. Therefore, investors are also saying they can no longer trust the regime’s Central Bank.