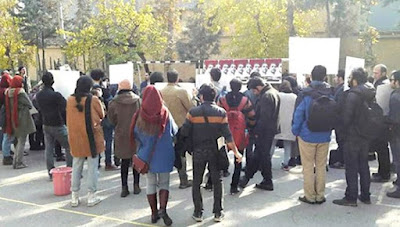 Iran, Nov. 30, 2018 - These days, we’re witnessing a multitude of crises throughout Iran. These different events are gradually joining one another and becoming a very strong movement, a movement that can cause fundamental change.
In a country that has been enchained in tyranny and poverty for decades, any of these crises can play the role of a spark on a powder keg.

A look at some of the crises in Iran

The workers of Haft Tapeh and Ahvaz in Khuzestan province have been protesting for their most basic rights for several weeks.
At the same time, the farmers of Isfahan have been protesting for their rights to water for several months. The tension between the farmers and the Iranian regime has become so intense that it has led to clashes between the protesting farmers and security forces on several occasions.
In Tehran, government employees and retired government workers intermittently protest in front of the Iranian regime’s parliament for their rights.
Whereas, teachers of hundreds of schools in dozens of cities have gone on repeated strikes demanding pay raise, job security and the release of their imprisoned colleagues.
Meanwhile, the privatization of Iran’s hospitals has caused its own set of problems and has negatively impacted the livelihoods of hospital workers, who gather for demonstrations every once in a while.
At a broader scale, the privatization of government institutions has caused deep problems in different parts of the country, and those problems are manifesting themselves in demonstrations in different cities. Haft Tapeh is just a sample of this deep-rooted crisis of the Iranian regime.
In Kermanshah province, west of Iran, the victims of last year’s devastating earthquake are still living in the desert with only tents and frail trailers as protection against the weather. And now, a new earthquake has hit the same region, driving even more people into misery. Meanwhile, the regime has neglected the plight of the people of Kermanshah and has failed to provide them with the minimum facilities and aid to overcome their ordeal.
The IRGC-linked financial institutions are another part of this multipronged economic crisis. The clients of these institutions, who have been robbed of their wealth, are protesting across Iran to claim back their investments that have been spent on the Revolutionary Guards ventures beyond Iran’s borders, filling the coffers of Lebanon’s Hezbollah, the Houthis in Yemen and the Badr Corps in Iraq.
In southeast of the country, the poor people of Baluchistan are bearing the violence of IRGC forces. Every week, news of several murders of Baluch citizens by the Revolutionary Guards finds its way into social media channels. The people of Baluchistan, fed up with the tyranny and oppression of the Iranian regime, are becoming bolder in confronting security forces.

Teachers, drivers, railroad workers, and many other Iranian citizens are engaged in a total struggle with a regime that has at times failed to pay their wages for more than 11 months. They have taken to the streets to reclaim their most basic rights.
At the same time, these crises have found their way into the ranks of the regime and the power hierarchy. The different factions within the Iranian regime are constantly confronting and blaming each other for the country’s economic problems.
Recently, a group of parliament members put forth the demand to impeach Ali Larijani, the speaker of the parliament.

What the protesters are saying

The slogans and demands of different groups of protesters are saying are very similar and hint at an impending major confrontation between the people of Iran and the ruling regime.
In a message that was widely distributed on social media, one of the farmers of Isfahan who have been protesting over their rights to water said: “I’m a farmer from east Isfahan. Why aren’t you talking about the plight of the injustice you’ve done to the thousands of families who used to live in comfort but are now struggling to make ends meet?
“I myself was arrested and sent to solitary confinement because I had protested for my right to water. My sight was damaged because of the beatings of security forces. Three of my teeth were broken. While I was in a critical condition, they gagged me, blindfolded me and tied my hands and feet and abandoned me in front of the Khourasgan hospital.
“I was a livestock farmer. They destroyed my life. My father in law and my brother in law are now selling coal. Please send my message and those of other farmers to the world.”
During the protests of Khuzestan, one of the women who joined the protesters in solidarity said, “If they don’t listen to our demands, I will take my demands straight to Khamenei!” This video was widely distributed in social media channels.
In the demonstrations of Ahvaz Steelworkers, the protesters were chanting, “We are steel workers, we will break the roots of tyranny.” Another group of workers was chanting, “We will fight oppression and tyranny.”
In Haft Tapeh, one of the protesting workers has published a note. “Do you really think the workers of Haft Tapeh believe your words,” this worker writes, addressing the private owners of the company who have driven Iran’s largest sugarcane factory to bankruptcy. “The workers of Haft Tapeh will not tolerate your presence under any conditions.”

Since last December, uprisings and protests flared across Iran and have turned into a wildfire that is engulfing the entire regime.
National unity and solidarity is bringing Iranians closer together toward fulfilling their long-held dream of overthrowing the tyrannical regime of the mullahs and establishing freedom in their beloved country.