Iran: Regime’s Ban of Telegram Is a Failure 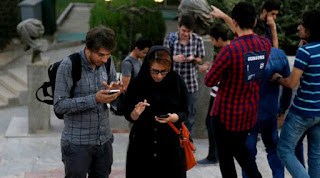 Iran: Regime’s Ban of Telegram Is a Failure

30 November 2018.
By Mahmoud Hakamian
Earlier this year, the Iranian regime made the decision to ban Telegram – the most popular messaging service in Iran with more than 42 million regular users. The hardliners ordered internet service providers to block access to the messaging service on 30th April.
Telegram has been an important tool for the people of Iran and during the election process last year when President Hassan Rouhani was re-elected for a second term its usage was widespread across the country.
The Iranian regime explained that the judiciary banned the application because of the sheer number of lawsuits against Telegram.
An Iranian official said that they had contacted Telegram to provide the regime with details about “offenders” but they did not get the information they wanted. Amoli Larijani said the week after the ban was imposed that Telegram is being used for nefarious purposes. He said: “That a messaging [application] becomes a safe haven for criminal acts and individuals [to] commit any criminal offense, from frauds to crimes against the reputation of persons and terrorist acts, is not acceptable for any country. Is it reasonable and logical to accept that a person, while offering some services in a physical and realistic way, turns that place into a safe haven for criminals? Cyberspace has exactly the same status."
Telegram has been banned several times in the past few years, but the tech-savvy people of Iran have been able to get around the ban, very easily, by using proxies. This time, the judiciary instructed internet service providers to make sure that the people cannot bypass the ban by using proxy tools. However, this was not effective because the people are still able to find ways to use the application.

The regime urged the people to give up on the idea of using Telegram and presented an equivalent. However, the people were not interested in the regime’s applications. They know that they will be used to spy on the people so they refuse to open themselves up to further oppression and suppression.


The ban is also being undermined by news agencies – both hardliner and conservative ones, including Tasnim News Agency and Fars.
Oppression in Iran is continuing despite the widespread discontent for this very reason. The people of Iran have been taking to the streets in protest against many different problems for almost a year and the situation threatens to explode at any second. To counter, or at least to try and control the situation, the Iranian regime is carrying out mass arrests of protesters. However, this is not dissuading the people from voicing their dissent. In fact, it is making them more determined.
The people of Iran want regime change because they know it is the only way in which they will ever experience freedom, democracy and human rights in their country. They support the U.S. sanctions that are crippling the economy because they know that the regime needs cut off from the funds that it uses to spread chaos across the Middle East.