US Sanctions on Iran Are Working Admit Iran Officials 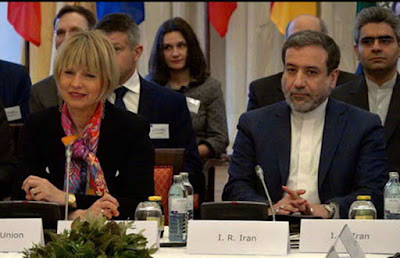 US Sanctions on Iran Are Working Admit Iran Officials

London, 27 Nov - A senior Iranian official has admitted that Iran now receives little benefit from the 2015 nuclear deal since the US reimposed sanctions on the country earlier this year, which means that sanctions are working.
Speaking at a seminar on Iran-EU cooperation held in Brussels, on Monday, November 26, Abbas Araqchi, the Islamic Republic's deputy foreign minister for political affairs, said: "The Joint Comprehensive Plan of Action (JCPOA) is in a ‘critical situation’… This is a reality".
He explained that since US sanctions were reimposed in August and November – the fulfilment of a promise by Donald Trump when he pulled the US out of the nuclear deal in May – Iran's benefits from the lifting of sanctions has “nearly reached zero” and that Europe should “cooperate” with Iran to restore the balance.
At the same seminar, Ali Akbar Salehi, the Islamic Republic's deputy President and the head of Iran Atomic Energy Organization, criticised the US withdrawal from the JCPOA, but stated that Iran was still committed to it, which is odd, considering that Trump withdrew from the agreement because Iran had already violated it on numerous occasions.
Araqchi also criticised European countries for being unwilling to host the Special Purpose Vehicle (SPV), which was designed by the EU as a way to circumvent US sanctions against Iran by using Euros (or perhaps even a barter system) to pay for Iranian oil and gas exports.
He complained that their reluctance was down to recent remarks by Brian Hook, the US State Department's special representative on Iran, but the truth is more likely that no country wants to host something that could leave them liable to US sanctions or that would help Iran that has plotted terrorist attacks in three European countries this year alone. Thankfully, the attacks in France, Albania, and Denmark were all foiled.
Salehi then threatened "ominous" outcomes if the EU did not help Iran to receive all of the benefits of JCPOA, saying that the situation would be “unpredictable".
Yet despite these threats, the EU’s climate and energy commissioner Miguel Arias Canete still said that Europe was committed to the SPV.
He said: "Nobody should have any doubt on the level of political ambition and determination by the member states involved, in particular, France, Germany and the United Kingdom, to swiftly operationalise the SPV."
It is shameful that the EU is still desperately trying to save the nuclear deal when allowing the Regime to collapse would benefit the Iranian people and the word as a whole.