Economic tsunami on the horizon for Iran? How come? 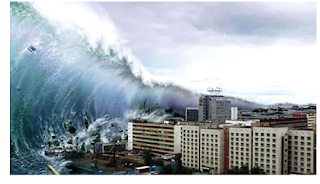 Economic tsunami on the horizon for Iran? How come?

Dec. 30, 2018 - In his address to the parliament, while presenting next year’s budget bill, Iranian president Hassan Rouhani repeated his false claims of economic success by his administration, although he acknowledged that this “glorious” advancements towards prosperity were stopped and reversed due to “American conspiracies.”
The usual fake data and statistics aside, contrary to his usual tactic of spreading false hope, Rouhani inevitably accepted that sanctions have put the country’s economy in a bad situation.
Such claims could only be justified if one disregarded the mullahs’ unrelenting bid for nepotism, kleptocracy, and general economic mismanagement over the past four decades.

But, the mere confession of economic misery by Rouhani, even if he blames everyone except for the main culprits, shows that the problems have grown so big that denial and pretense don’t work anymore.
On December 26, Ebtekar newspaper published an article titled “A tsunami in Iranian trade,” and investigated the impact of sanctions against Iranian banks by China’s Kunlun bank.

The bank of Kunlun branch in Beijing

Kunlun, the main official channel for money flows between China and Iran, confirmed in October 2018 that it will stop accepting yuan-denominated Iranian payments to China from November 1. The bank is controlled by the financial arm of Chinese state energy group CNPC, which makes it a big deal for Iran and the success of U.S. sanctions. In late August 2018, Kunlun already suspended euro-denominated payments from Iran.
“Financial transactions between Iran and China are among things that are vital to the country’s economic activities and if disrupted it could face our imports and exports to serious challenges. Challenges like a stop to economic activities!” Ebtekar newspaper wrote.
According to Ebtekar, some trading officials previously promised that “economic players can follow up on their transactions with the Chinese bank (Kunlun) through their native banks… but less than two weeks after this statement, [Kunlun] bank announced that it had some conditions to resume trading relations and one of its provisions is to stop transactions and (financial exchanges) with some industries. It’s clear that under such conditions, Iranian trading relations start to slow down and in such a situation, the future of Iran’s economy can face serious challenges.”
Jahan-e Sanat, another newspaper affiliated with Rouhani’s faction, reports that one hundred paper production units out of 600 have shut down after various problems in the paper market.
“If this trend continues, the rest of the active units in this industry will shut down too. The shut down of paper-producing workshops following a series of other shutdowns in the textile, shoe-making, home-appliances, and clothing industries indicate a deepening economic stagnation and the increasing unemployment rate,” according to Ebtekar.
International institutions are also issuing alarming reports about the future of the Iranian economy.
The International Monetary Fund (IMF) predicts a negative growth rate for the Iranian economy during the current and next year.
According to the IMF, Iran’s economy will shrink by 1.47 and 3.61 percent in 2018 and 2019 respectively.
After the U.S. left the JCPOA and announced a new round of sanctions against the Iranian regime, the ruling theocracy in Tehran was wishfully expecting countermeasures from Europe, Russia, and China.
The grandiosely touted Special Purpose Vehicle that the EU presented to the Iranian regime as a remedy to sanctions turned out to be nothing more than an exchange mechanism for oil to food and drugs, which isn’t realized as of now.
That’s while Switzerland is in talks with the U.S.to create a clearinghouse that is creating the same mechanism, but with U.S. approval.
The whole dilemma has disillusioned the Iranian political elite about circumventing the sanctions. Javad Zarif, Iranian foreign minister and one of the most outspoken proponents of the Iran nuclear deal and hopeful of Europe’s help, said in an interview with an Iranian newspaper this week: “The Europeans had a serious opportunity in Iran and lost it because of inaction and passivism towards the U.S. or a lack of internal cooperation or opportunism (where they wanted to have the benefits without paying the price). Unfortunately, Europe isn’t ready to pay the price and the losing party in the SPV case in Europe.”
In 2018, the European Union has been among Iran’s top three trading partners, accounting for 16.3 percent of the country’s foreign trades, after China and the United Arab Emirates. In contrast, Iran ranks 33 among EU’s trading partners, accounting for less than one percent of the Union’s overall amount of global trading. Not surprisingly, U.S. is EU’s top trading partner with a close-to-17-percent share.
Now, how Europe “is the losing party in the SPV case” is hard to explain, but there is an appropriate Iranian proverb that translates somewhat to the following: “If a gambler doesn’t say I don’t give a damn after losing, what else can he do?”
Massoud Khayatzadeh, member of Iran’s chamber of trade says: “While almost all countries have cut their relations with Iran, China was the only country that continued to keep its small relations with us. The fact that Kunlun bank was supposed to restart banking exchanges but hasn’t done it as of now can have a great impact on the economic future.”
“Currently, more than 80 percent of our imports and exports are maritime and this cut of connections isn’t good news and in other words, there will be a tsunami in our trading,” Khayatzadeh adds.
Majid Pourkaed, another member of the trading chamber, says about the impact of Kunlun bank’s sanctions on Iran’s economy: “There is no doubt that the discontinuation of relations will create a huge disruption in our economic system. In other words, it will put us in a state of uncertainty.”
Faezeh Hashemi, the daughter of late Akbar Hashemi Rafsanjani, former Iranian president and one of the founders of the Islamic Republic, recently said in an interview with a local newspaper that “intimidation” and “fear” were the main things propping up the Islamic Republic.
“In my view, a breakdown of principles has already happened, there hasn't been a physical collapse, but I see that as very likely,” she added.
Considering Iran’s pathologically sick economy, its “collapse of principles” and rule through “intimidation” and “fear”, and severe U.S. sanctions without much help from Europeans, Russia, and China, it isn’t farfetched to expect an economic tsunami and a “physical collapse” soon.