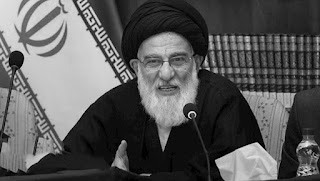 Iran, Dec. 25, 2018 - On Monday, Iranian state-run media reported that Mahmoud Hashemi Shahroudi, a senior Iranian cleric, had died of illness. Shahroudi, 70, was the chairman of the Expediency Council, a body that resolves disputes between the Iranian regime’s parliament and the Guardian Council.
Shahroudi previously served as the chief of the Iranian regime’s judiciary for 10 years. Shahroudi was also the first chief of the Islamic Supreme Council of Iraq, a militia group the Iranian regime founded after the 1979 revolution to pursue its expansionist goals in Iraq. The Council has had an active role in carrying out terrorist attacks in Iraq.
At one point, Ali Khamenei, the supreme leader of the Iranian regime, was rumored to be grooming Shahroudi to become his successor. In 2011, Khamenei appointed Shahroudi as the head of the Supreme Delegation to Resolve Disputes Between Government Branches.
During his tenure as the head of the judiciary, Shahroudi played a major role in the execution and torture of thousands of political prisoners and members of ethnic and religious minorities. Human rights activists have made calls that he is brought to justice in international tribunals. Earlier this year, Shahroudi was forced to cut short a visit to Germany because activists had filed complaints against him for his role in passing death sentences to political prisoners.