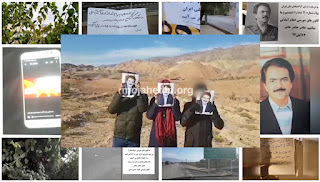 Iran, Dec. 23, 2018 - Latest report of “Resistance Unit” members associated to the Iranian opposition People's Mojahedin Organization of Iran (PMOI/MEK) in numerous cities across Iran targeting various symbols of the Iranian regime.
On Saturday, members of Resistance Unit 77 in Mashhad, northeast Iran, set fire to a base belonging to the Revolutionary Guards (IRGC) Basij paramilitary units. This resistance unit left a sign reading, “We support the jailed Ahvaz workers – Death to Khamenei,” referring to Iranian regime Supreme Leader Ali Khamenei and expressing their solidarity with the National Steel Group workers in their ongoing protests and strikes.

Members of a resistance unit in the city of Marand, East Azerbaijan province in northwest Iran, set fire to a banner associated to the regime’s hated Ministry of Intelligence and Security that included images of regime founder Khomeini and Khamenei.
Members of this resistance unit took footage of these measures, carried out on Thursday, December 20.

Recently, Iranian regime officials have expressed growing concerns over future protests, a new uprising and the role of PMOI/MEK resistance units.
“The United States through logistical support and Saudi Arabia through financial support and the [PMOI/MEK] with their forces on the ground are seeking to establish resistance units and carry out conspiracies in our country,” said Abbas Kabi, a member of the regime’s so-called Assembly of Experts.
“The issue at hand is the entire state, delivering a blow to the revolution. The enemy is very serious, the enemy allocates a lot of time, a lot of thinking; the enemy establishes many think rooms to be successful just once… Harsh living conditions and hard times should not last long, it should not be increased; or else, it will become irrecoverable and lead to irretrievable consequences. Well, the enemy is taking full advantage, in different shapes and forms,” said Mohammad Bagher Farzaneh as this week’s Friday prayer imam in Mashhad, northeast Iran.
“We must be very alert,” said Abolghassem Alizadeh, political deputy of the Iranian regime’s Friday Imams Policy Council. “[Khamenei] has indicated this year the enemy has launched a brouhaha and they may be seeking to implement their devious plans next year. Follow the developments in a smart fashion.”