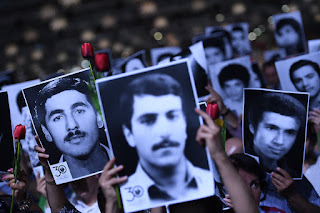 Published on 24 December 2018.
By Reza Shafiee
Amnesty International has published a 200-page comprehensive report on the massacre of political prisoners in Iran, 30 years after it actually took place. Its main focus is the dark days of 1988 massacre of 30,000 political prisoners in Iran.
Had the 1988 massacre been given enough international attention it deserved back then, Iranian people would not have faced unbridle human rights abuses in the years that followed. Impunity for crimes in those days, embolden the regime over the years to the extent that it is leveling the graves of the same victims all over Iran.
“The UN establishes an independent, impartial and effective international mechanism to help bring those responsible for these abhorrent crimes to justice,” the “Blood soaked” history of 1988 massacre of political prisoners in Iran will be put to rest”, the report concludes.
The human rights watchdog also says that these are crimes against humanity and the perpetrators should be hauled before the international criminal court.
Massacre of political prisoners
There are different accounts of the 1988 massacre of political prisoners in Iran because of the level of secrecy the Iranian regime officials wrapped around it. Many former and current top regime’s officials flatly deny gruesome events of that summer.
What really happened?
In the summer of 1988, Khomeini’s ambiguous war with its neighbor Iraq came to a halt when his top brass Revolutionary Guards commanders foresaw a crushing and imminent defeat if he did not stop the war soon. War with Iraq served as a cover for internal suppression.
At home Khomeini had a powerful opposition and he needed to get rid of the existential threat to his absolute rule, the People’s Mojahedin Organization of Iran (PMOI /MEK). He saw thousands of political prisoners as a potential asset for the opposition.
Khomeini hastily put together a committee to exterminate the prisoners. It of course needed some kind of religious green light. His infamous hand written fatwa did the trick.
The “Death Commission” – as it is known among Iranian political prisoners – was born to set in motion one of the most heinous crimes against humanity the world had seen in the 20th century. The commission oversaw the massacre of 30,000 political prisoners in the summer of 1988, mostly members and supporters of MEK.
On the eve of 28th anniversary of the 1988 massacre in the summer of 2016, Maryam Rajavi, President of the National Council of Resistance of Iran (NCRI) tasked the members of the opposition to embark on a worldwide campaign called “Movement for Justice.”
The campaign is seeking justice for fallen victims of the theocratic regime in 1988. The final goal is to get the UN Security Council to hold the Iranian official –past and present- accountable for 1988 crimes and stand trial before an international court for crimes against humanity.
People protest against executions and human rights violations in Iran on a square near the Nuclear Security Summit in The Hague March 25, 2014. (Reuters)
Early whistleblower
Ayatollah Hossein-Ali Montazeri was the first whistleblower of 1988 massacre in Iran. Montazeri, the handpicked successor of Khomeini, was sacked for his public objections to mass executions in 1988. He spent the rest of his life under house arrest and died in 2009. His son leaked an audiotape of his conversation with the members of Death Commission in 2016.
In the moving tape, Montazeri can be heard telling a meeting of the “Death Commission” in 1988 that they are responsible for a crime against humanity. He said: “The greatest crime committed during the reign of the Islamic Republic, for which history will condemn us, has been committed by you. Your names will in the future be etched in the annals of history as criminals.”
Rewarding the culprits
In the present Iranian regime, culprits of crimes in a twisted logic are rewarded. Some members of the Death Commission still hold high offices in the country. Ebrahim Raisi is one of them. He was a low level cleric at the time and in return for his services was elevated in the rank and files of the mullahs’ hierarchy.
Raisi is a close confidant of the Supreme Leader Ali Khamenei. Currently Raisi is the custodian of Astan Quds Razavi, the wealthiest charity foundation in charge of Iran’s holiest shrine in Mashhad, northwestern Iran, with very close ties to Khamenei’s powerhouse.
Raisi and Mostafa Pour-Mohammadi – Iran’s Justice Minister in Hassan Rouhani’s cabinet – were two of the four members of the Death Commission who were tasked by then Supreme Leader Khomeini to summarily execute political prisoners. In the summer of 1988, the Commission handed down 30,000 death sentences.
The kangaroo courts hardly lasted more than three minutes on average. Some of the political prisoners who miraculously survived the slaughter have written or spoken of their ordeals. The judges asked a simple question: Do you still believe in Mojahedin? And depending on the answer, one could go to gallows. The gruesome accounts of survivors, especially female prisoners, often leave the listeners in shock.
Pour-Mohammadi has since admitted his role in the “Death Commission” and boasted that he was proud to “carry out God’s will and he has not lost sleep over what he did.”
Alireza Avaie another member of the commission replaced Pour-Mohammadi as Rouhani’s Justice Minister in his second cabinet. His personal record in participating in human rights violations goes a long way back when he was partner in crime with the likes of Ebrahim Raisi.
“The abject failure of the UN and international community to pursue truth and justice for the atrocities committed by Iranian authorities has had catastrophic consequences not only on survivors and victims’ families but also on the rule of law and respect for human rights in the country. Iran’s authorities must no longer be allowed to shield themselves from accountability for their crimes against humanity,” said Philip Luther Amnesty International’s Advocacy Director for the Middle East and North Africa.