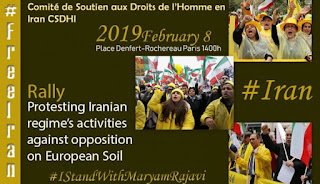 Iranian opposition supporters rally at Denfert-Rochereau, Paris
Since the beginning of 2018, the Iranian regime’s terrorist activities against its opponents, especially the National Council of Resistance of Iran (NCRI) and the People’s Mojahedin Organization of Iran (MEK/PMOI), has taken a new dimension.
Iran under the mullahs is considered as the world’s “most active state sponsor of terrorism.” The Iranian regime provides funding, weapons, training, and sanctuary to numerous terrorist groups–most notably in Iraq, Afghanistan, Syria, Yemen and Lebanon–posing a security concern to the international community
Tehran has used a wide range of its terrorist agents and mercenaries to assassinate Iranian dissidents around the globe.
For decades, Tehran has been dispatching its operatives to Europe to carry out assassinations and other acts of terrorism.
The mullahs regime uses terrorism as a tool of its statecraft, and it has no reservations about using that tool on any continent.
Iran’s terror activities against the Iranian resistance; the NCRI and the MEK/PMOI, in 2018
March 2018- The mullahs agents intended to launch a mass killing targeting the gathering of the PMOI members while celebrating Nowruz (the Iranian New Year) in Albania. But Albanian intelligence services thwarted the terror operation.
June 30, 2018 – Authorities in Belgium, France, and Germany arrested several Iranian operatives, including Assadollah Assadi, an Iranian diplomat stationed at the mullahs regime’s Vienna embassy, in connection with a bomb plot to be carried out against the grand gathering of the National Council of Resistance of Iran in Paris in June.
August 9, 2018: The US arrested two Intelligence Ministry agents of the mullahs’ regime, who were spying on and plotting against the PMOI/ MEK and NCRI members in that country.
December 19, 2018: Albania expelled Iran’s ambassador to the country, Gholamhossein Mohammadnia, and another Iranian diplomat for “involvement in activities that harm the country’s security” and for “violating their diplomatic status”. The expelled Iranians have plotted terrorist attacks in the country, including targeting MEK\PMOI to silence dissidents.