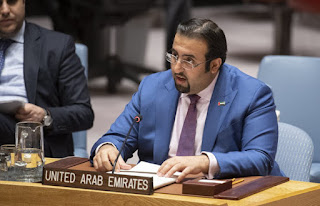 Iran Focus
London, 24 Jan - The UAE has condemned Iran for its interference in the Middle East, accusing the Gulf country of creating tension and instability in the region, during the UN Security Council’s quarterly Open Debate on the situation in the Middle East.
Saud Al Shamsi, Deputy Permanent Representative of the UAE to the UN, delivered a statement to the debate, which read: “The conflicts in Yemen and Syria clearly show that Iran is the common perpetrator. Iran has created more tension and instability in our region, posing a serious threat to the stability of the Middle East. We therefore call on the international community and the Security Council to seriously pressure Iran to end its interference and support for terrorist and sectarian militias in Arab countries.”
Al Shamsi asked the international community and the UNSC to increase pressure on Iran to end its malign interference and its support for terrorist and sectarian militias, like Hezbollah and Hamas.
He said: “The international community, especially the Security Council, must address those parties that continue to undermine regional stability and peaceful coexistence so that the region can invest its energies and resources in building peaceful, prosperous, and tolerant societies free from conflict, violence, and terrorism.”

Al Shamsi then reaffirmed the UAE’s commitment to the UN-sponsored political process for lasting, sustainable peace in Yemen, led by Martin Griffiths, Special Envoy of the UN Secretary-General on Yemen.
He said that the US-backed Saudi-led coalition to restore the legitimate government has respected relevant UNSC resolutions and remains committed to the Sweden Agreement on Hodeida, a crucially-important port in Yemen, but that the Iranian-backed Al Houthis have repeatedly violated both.
Al Shamsi said: “These transgressions include heinous crimes against the Yemeni people, threats to the security and stability of neighbouring states and international navigation, and looting of humanitarian aid.”

Al Shamsi also noted that Iran is obstructing any possible political solution in Syria, where Iran is sending it terrorist militias, like Hezbollah, to fight on behalf of the Bashar Assad Regime.
This means that Iran is compliant in all crimes against the Syrian people by the Assad Regime, as well as the displacement of millions of Syrians leading to a refugee crisis in Europe. Iran sees Syria as one of its provinces and wants to control it as a proxy state, believing that Assad will allow Iran to rule through him if he is in power when the civil war ends.