WHY GERMANY WAS RIGHT TO SANCTION IRAN REGIME'S MAHAN AIR 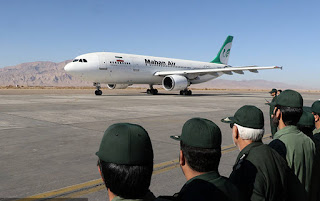 WHY GERMANY WAS RIGHT TO SANCTION IRAN REGIME'S MAHAN AIR

By Mahmoud Hakamian
Germany recently sanctioned Iran’s Mahan Air and rescinded permission for the airline to fly planes through German airspace, which led Iran’s minister of roads and urban development Mohammad Eslami to claim that “all the companies and airline industry of the Islamic Republic are sanctioned”.
German sources told Reuters on January 21 that Mahan Air’s license for flying to Germany had been cancelled, with the German federal government citing “safety” concerns and Mahan Air’s potential “military” use by the Iranian Regime. While in a meeting with EU foreign ministers later that same day, German FM Heiko Maas advised that Mahan Air had transported weapons and soldiers to war-torn areas in Syria on behalf of the Iranian Regime.
The German foreign ministry said in a statement: “This decision has been taken in light of the recent sanctions agreed upon by the EU Council after the [terroristic] developments in France and Denmark.”
The terrorist actions by the Iranian Regime, which led to these sanctions, included a failed attempt to bomb a grand gathering by the Iranian Resistance in Paris in June 2018 and the Resistance headquarters in Albania in March.
Considering these recent developments, the National Council of Resistance of Iran’s foreign commission has published a detailed report of Mahan Air’s activities and its relationship with the Islamic Revolutionary Guards Corps (IRGC).
In the report, the NCRI advise that although Mahan Air is registered as a private company, it has close ties with high-ranking Iranian officials and has enjoyed state-sponsorship since day one. In fact, Mahan Air was founded shortly after the IRGC’s foreign terrorist arm, the Quds Force was established and virtually all of its major players are linked to the IRGC or the Quds Force, including:
• Hamid Arabnejad, chairman and CEO of Mahan Air, and close friend to Quds commander Qassem Soleimani
• Hamid Aslani, HR head of Mahan Air, advisor to Hamid Arabnejad, and Brigadier general of the IRGC.
• Hamid Asgari, head of Mahan Air’s catering and former commander of IRGC’s 41st division, known as the Tharallah Division. He is close to Qassem Soleimani.
Also, the Mola Almowaheddin institute, which describes itself as a charity but it likely a front for the Regime, owns 100% of Iran’s stock.
The NCRI advise that Soleimani organized daily Mahan Air flights to transport weapons, equipment and fighters to Syria to aid the regime of Bashar al-Assad. They say that Mahan Air transports IRGC militias to Damascus in groups of 200.