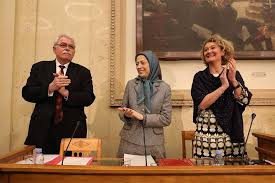 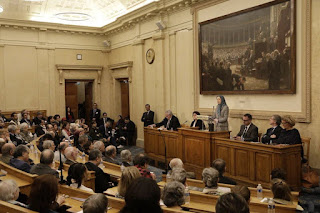 The Parliamentary Committee for a Democratic Iran held a conference titled “Iran Perspectives 2019,” on Thursday. A firm European Union policy was called for, regarding the Iranian regime’s terrorist threats, and deteriorating human rights conditions.
The meeting at the Colbert Hall was kicked off by French MP André Chassaigne, who expressed his concern about the human rights conditions in Iran. “The human rights situation in Iran is catastrophic,” Chassaigne said, drawing attention to more than 3,600 executions in Iran during the presidency of Hassan Rouhani.
President-elect of the National Council of Resistance of Iran (NCRI) (NCRI), Mrs. Maryam Rajavi, called on the French government to initiate a bold policy in the EU that supports the people of Iran and respects their struggle for freedom and democracy.
“The regime’s overthrow which is the desire of the people of Iran has never been so much within reach,” she said.
“The mullahs are badly in need of political and commercial relations with Europe. Nonetheless, they cannot forgo terrorist operations in the heart of Europe because they are much weaker than is conceived; they do not know of any other way but to suppress and to create crisis,” Mrs. Rajavi explained.
She asked the attendees to look at Rouhani’s record. She recalled, “Thousands of executions; massacres in [PMOI/MEK camps] Ashraf & Liberty [when in Iraq]; wasting of Iran’s revenues on wars in the region; terrorist operations by the Ministry of Intelligence and Security (MOIS) under his command; and the Revolutionary Guards’ (IRGC) missile program, which have impoverished the majority of people in Iran.”
“A significant development in Iran has been the formation of Resistance Units. These units are made up of members and supporters of the Iranian Resistance who come from among Iran’s younger and freedom-loving generation,” Mrs. Rajavi added. The vast network of PMOI/MEK Resistance Units inside Iran are encouraging the people’s daily protests.
“In addition to their terrorist plots, the mullahs have consistently been spreading falsities against the Iranian Resistance, fearing the impact of the PMOI/MEK and the Iranian Resistance on the uprisings,” Mrs. Rajavi added.
“The policy of appeasement of the mullahs must be terminated. Tying hopes to investments in and commercial deals with Iran is an illusion,” she emphasized.
“Turning a blind eye to the Iranian Resistance is not only to the detriment of the people of Iran, but also to the detriment of the Middle East and the world who are in this way deprived of the key to the Iranian problem,” Mrs. Rajavi added.
“The main obstacle to Iran’s progress and the main cause of wars and crisis in the region will thus be removed,” she warned. “We enjoy our people’s support in establishing a republic based on the separation of religion & state, gender equality, abolition of the death penalty, an independent judiciary, autonomy for ethnic groups, a foreign policy based on peaceful co-existence, and a non-nuclear Iran.”

MP Frédéric Reiss addressed Mrs. Rajavi. “You represent the true alternative, and you have our support,” he said. “We question the EU, which continues to believe in the virtues of dialog [with the mullahs’ regime]. I support the struggle for freedom in Iran.”