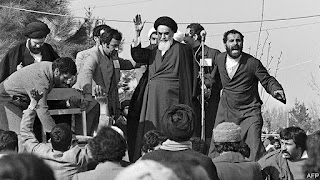 By INU Staff
INU- In 1979, when the mullahs took over in Iran, many Western intellectuals actually supported them, wrongly believing that this would end to the suppression of the Iranian people. However, while one tyrant was deposed, another was ready and waiting to take his place.
Ayatollah Ruhollah Khomeini took power and immediately cracked down on dissent, disqualifying some opposition candidates in elections, rigging the elections to prevent other candidates from taking power, banning certain political parties, and then imprisoning and killing dissidents en-masse. Yet, a policy of appeasement by the West has kept the mullahs in power for 40 years and only now is the tide beginning to turn.
Many Westerners applauded the Iranian people for bringing down the Shah in 1979 after years of his vicious rule, so they should certainly start praising the Iranian people’s uprising now for their attempts to bring down the mullahs after four decades of their vicious rule. However, few do. The Regime arrested at least 7,000 dissidents during a crackdown on protests last year, according to Amnesty International, which is just the latest in a long line of abuses against the Iranian people, but few in the West mention it, even the European Union, which prides itself on human rights.
Mariam Memarsadeghi said: "Iranians who yearn for democracy and an open, prosperous society at peace with the world are met with overwhelming indifference from the West's media and political leaders, not to mention its universities, unions, civic groups, churches, and celebrities—the very people and institutions that historically have lent their empathy, solidarity, and concrete assistance to the cause of freedom across the world."
Thankfully, one Westerner has been paying attention and he just so happens to be the most powerful man on earth.
Donald Trump recently tweeted: "40 years of corruption. 40 years of repression. 40 years of terror. The regime in Iran has produced only #40YearsofFailure".


His administration has spent much of the past two years calling attention to the plight of the Iranian people, including the protests that began at the end of 2017. He has reimposed sanctions on Iran and called for other countries to do the same, even using Vice President Mike Pence and his various ambassadors across the world to appeal to the better nature of US allies and encourage them to put people before profit.
The EU, despite being the location of several Iranian terror attacks or assassinations attempts targeted at dissidents in 2018, is still set on preserving the nuclear deal with their special financial mechanism, which will allow companies to trade with Iran and evade US sanctions. Although, the US says that this will not evade their sanctions, while many experts have pointed out that this only allows Iran to buy non-sanctioned goods anyway.
In 2019, we should stand with the Iranian people, not the Regime.