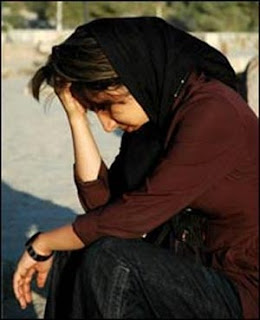 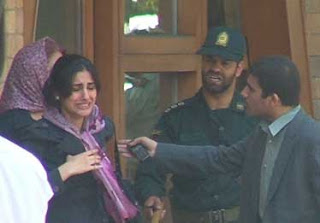 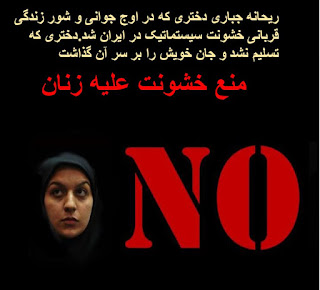 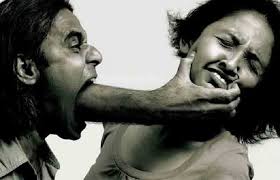 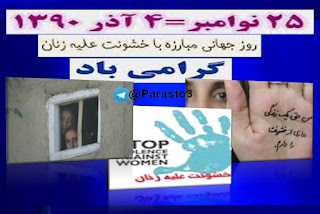 On the International Day for the Elimination of Violence Against Women, the Women's Committee of the National Council of Resistance of Iran salutes the freedom-loving women who have defied the state-sponsored violence against women and carry on with their struggle for regime change in Iran. The Women's Committee also commemorates those women who gave their lives in this confrontation with utmost courage.
The clerical regime's violent policies and conducts against Iranian women and girls have been steadily on the rise over the 38 years of the mullahs' rule because this misogynous regime has been founded on suppression of women and discrimination against them. The clerical regime's Constitution and laws institutionalize violence and discrimination against women and sanction the cruel punishment of stoning.

Iran is the only country in the world where women have been executed or tortured to death by the thousands for their opposition. Tens of thousands of PMOI women were massacred by the regime in the 1980s for exercising their freedom of speech and thought. They included teenage girls, pregnant women and elderly mothers. In 1988, thousands of women were among the 30,000 political prisoners massacred and buried in unmarked mass graves across the country. The audio clip and letters of Ayatollah Hossein-Ali Montazeri, Khomeini's ousted heir, reveal some of the most vicious instances of torture, rape, and execution of girls and women in the Iranian jails.
17 women were killed and six others kidnapped and taken hostage by the Iranian regime's mercenaries in bloody attacks on the Iranian opposition PMOI in camps Ashraf and Liberty between April 2011 and November 2015.

Female political prisoners in Iran continue to suffer tremendously. After spending long periods in solitary confinement under torture and interrogation, these women are sentenced to lengthy prison sentences where they contract various illnesses. Prison authorities, however, deliberately deprive them from having access to medical treatment to increase the pressure on them, while leaving them to die gradually. Maryam Akbari Monfared, Zahra Zehtabchi, Reyhaneh Haj Ibrahim, Fatemeh Mosanna, Nargess Mohammadi, Zeinab Jalalian, Maryam Naghash Zargaran, and Maryam Moghaddassi in Tehran's Evin Prison, Fatemeh Rahnama in the Sepidar Prison of Ahwaz, Fahimeh Ismaeli Badavi in the Yassouj Prison, Afsaneh Bayazidi and Hajar Piri in the Prison of Kerman, Setareh Arkwazi, in the Diezelabad Prison of Kermanshah, and Safieh Sadeghi in the Prison of Sanandaj, are in such conditions.
Attacking women's gatherings and savagely arresting them for expressing their protest is another manifestation of the state-sponsored violence against women in Iran. In a recent incident in Tehran, on November 21, 2016, security forces and plainclothes agents raided the gathering of a group of women in front of the parliament, viciously beating up and pushing them around. Some 30 women were arrested.
At least 71 women have been executed during Rouhani's tenure.
The so-called Virtue and Veiling plans are the mechanism by which the regime steps up social repression. The Iranian regime calls the so-called "mal-veiled" young women and girls "enemy agents" and mobilizes IRGC-backed gangs of thugs and hoodlums to harass and attack women under the pretext of mal-veiling. This is a policy endorsed by the regime's leader. Ali Khamenei personally reiterated the need to be harsh on the issue of women's compulsory veiling. "(We) must not suffice to a mere verbal prohibition," he said. (The state-run media, May 9, 2016) Khamenei thus sanctioned physical encounters with women who flout the mandatory veil and dress code.
The outrageous series of acid attacks on women in various cities were the product of such provocations. Given the regime's reluctance to arrest the culprits and grant support to the victims, using acid to attack women for vengeance has turned into a common practice.
This year, the regime deployed a special moral police, 7000 plainclothes agents in Tehran, and a new front called the "National, Popular Front for Virtue and Veiling" which is made up of 301 active institutes to monitor women's hijab in the streets and behind the wheels across the country and deal with offenders accordingly. These are in addition to the 26 government agencies and ministries which were already in charge of suppression of women.
In an unprecedented measure this year, flogging was added to the official list of punishments for women.
Young women and even girl children were flogged in Tehran, Qazvin, Golpayegan (Isfahan), Mashhad and Kerman.
School authorities in the southern Iranian village of Mokhtarabad in Kerman struck eight lashes of the whip, each, to at least ten girl students because their parents did not afford to pay 30,000 toumans (approx. $8.5) demanded by the school's principal. On other instances, young women were flogged as many as 99 lashes for participating in protest demonstrations, or in birthday and graduation parties.
At the same time, on November 17, 2016, a municipality agent in the northern Iranian town of Fouman slapped a destitute woman who was peddling in the street, sparking tremendous outrage among the public.
As for domestic violence, the news of torture and murder of women by their husbands hit a record high between March and June 2016. At least in ten cases, the victims ranging from a six-year-old girl to a 50-year-old woman did not survive the violence.
Violence against women and domestic violence are not considered crimes in Iran. Victims of violence do not enjoy any government support. The Civil Code considers men as heads of the household and the house as their private property. Fathers and brothers are allowed to kill their daughters and sisters since they own the latter's blood under the law. At the same time, in society, in schools and in the streets, the government endorses and promotes violence against women.
So long as the mullahs' misogynous regime is in power, human rights and women's rights are not going to be upheld in Iran. As the Iranian regime suffers from instability in every respect and is beset by social protests and discontent, it is historically essential that Iranian women actively engage in the movement for regime change in Iran.
Since the clerical regime is the epicenter of export of fundamentalism and its misogynous ideology to the region, every step towards regime change in Iran is a step towards elimination of violence against women in the Middle East and the world.
The Women's Committee of the National Council of Resistance of Iran
November 25, 2016