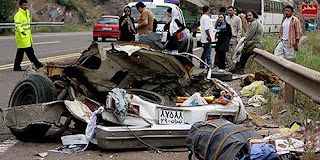 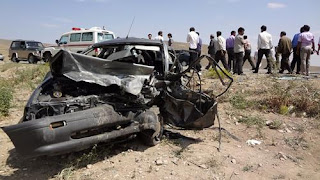 NCRI - Department of public relations and international affairs of Iranian regime forensics announced on Tuesday December 27 that more than 11 thousand people have been killed in traffic accidents in Iran in the first 8 months of the Persian year starting March 20, 2016.
The state-run ILNA news agency quoting this report wrote: “Of the total victims of road accidents in Iran this year, more than 9000 were men and 2500 were women.”
According to the news agency, the largest number of fatal accidents occurred in suburban routes taking the lives of more than 7,000 victims, and in urban routes about 3,200 people lost their lives.
These figures were published while the Iranian regime’s police chief said: “In the first seven months of this year, 288 fewer people have lost their lives in traffic accidents compared to the same period last year.”
Earlier, Hassan Qazizadeh Hashemi, Minister of Health and Medical Education, in March last year in a ceremony had said 17 thousand Iranians are killed annually in road accident which, according to him, the figure is a “national disaster” and shameful in the “international circles.”
Meanwhile, according to ILNA, the southern province of Fars with more than 1,000 victims had the highest death toll in road accidents in the first 8 months of this year.
Masood Habibi, head of the Iranian Red Crescent Youth Organization, said earlier that as a result of road accidents, 100 people are added to the number of disabled people across the country daily. According to statistics, each year on average 17 thousand Iranians lose their lives in traffic accidents.
Last year, Iran’s Markazi (Central) Insurance Research Institute announced that among the 190 countries of the world Iran, after Sierra Leone, has the highest mortality on the road.
Posted by Anjoman nejatiran at 1:23 PM