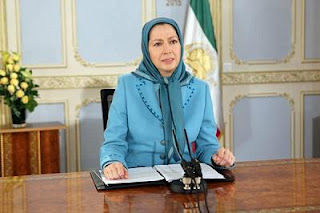 The Iranian Resistance's President-elect Maryam Rajavi said, "It is a national catastrophe with rare precedent in Iran's history, when the poor and drug addicts take shelter in cemeteries around the capital."
She blamed the ruling clerical regime and the criminal, unscrupulous mullahs for this tragedy and added, "This news provoked vast social outrage, indicating the Iranian people's hatred of a regime that every hour of its rule is tantamount to the devastation of numerous people and to further destruction and dissipation of the country."
Despite its deplorable and shocking impact on society, the tragedy of the homeless poor who sleep in graves is just one out of countless calamities inflicted on the people of Iran by Khamenei, Rouhani and other leaders of the regime and their children who are directly involved in multi-billion-dollar embezzlements and pocket astronomical salaries.
The 18 to 20 million people who live in 2700 shanty towns and illegal dwellings, particularly around major capitals, the rampant phenomenon of trafficking of young women and girls to other countries, the rising number of women who post ads on the walls to sell their infants, and the 30 per cent of the population who according to the admissions of the regime's officials are starving, are but a few examples indicating how the Iranian people's lives have been destroyed under the repressive rule of the Velayat-e Faqih, Khamenei.
Such devastation coupled with incessant executions and daily arrests of some two to three thousand people comprise the security the mullahs claim they have provided for the people of Iran by engaging in the slaughter of the people of Syria, Iraq and other countries in the region.

Maryam Rajavi appealed to her compatriots, and all humanitarian and benevolent people and youths of Iran to help the hungry and the homeless in this cold winter. She said, "Contrary to the callous mullahs, the people should create a national movement of humanitarian solidarity to save the victims of the clerical regime. Such compassion and charity are deeply rooted in the Iranian culture and in the teachings of Islam and the criminal mullahs are the greatest enemy of both," Mrs. Rajavi stressed.
"Suppression, corruption and belligerence are inherent to the Velayat-e Faqih regime," Mrs. Rajavi pointed out and added, "so long as this clerical regime rules Iran, the Iranian people's poverty and destitution will endure. The ultimate solution for putting an end to all these tragedies is regime change in Iran and establishment of freedom, democracy and popular sovereignty," Maryam Rajavi reiterated.
The Secretariat of the National Council of Resistance of Iran
December 30, 2016
Posted by Anjoman nejatiran at 10:59 AM