Congressman Wittman: I Am More Concerned About Iranian-Backed Militant Groups Than ISIS 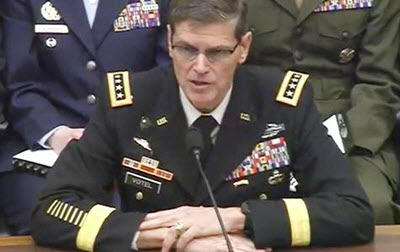 Congressman Wittman: I Am More Concerned About Iranian-Backed Militant Groups Than ISIS

Head of CENTCOM: Iran Aims to Be ‘Regional Hegemon’
Army General Joseph Votel, the head of the U.S. Central Command, told Congress on Wednesday he shares lawmakers’ concerns about Iran’s destabilizing effect in Iraq and the wider Middle East. Susan Jones wrote in CNSNews on March 30, 2017 and the article continues as follows:
“I think the Iran's objective here is to be the regional hegemon,” Votel told the House Armed Services Committee. “They want to be the predominant power in the region, there's -- there's no doubt about that and I think that's what they -- what they are pursuing.”
Votel was responding to Rep. Rob Wittman (R-Va.), who told the panel that he’s more concerned about Iranian-backed Shia militant groups than he is about ISIS.
Members of a Shi’a militia group carry a picture of Ayatollah Ali al-Sistani, the top Shi’a cleric in Iraq, in Basra, Iraq on Sept. 26, 2015. (AP Photo/Nabil al-Jurani, File)
“Today, as we speak, Iran and the U.S. have a common interest in defeating ISIS,” Wittman said. “The question then becomes, once ISIS is defeated, Iran has in mind to re-create the Shi’a crescent through that region.”
“I share in your concern about Iran and their long-term intentions here,” Votel responded to Wittman. “And certainly with the 100,000-plus Shia militia group members on the ground there (in Iraq), this is extraordinarily -- this is extraordinarily concern -- big concern as we move forward.”
Votel said the U.S. embassy is “well engaged with the government of Iraq” as that Shi’a government considers enacting a law governing paramilitary forces, including Shi’a militias, in their country.
Obama’s Iran deal ‘undermined’ Sunni trust
Rep. Don Bacon (R-Neb.) told the hearing the United States needs the help of Sunnis to defeat ISIS. But he said the Obama administration’s nuclear agreement with Iran “undermined the trust of many Sunni countries.”
Bacon asked Votel if there are “concerns” about the U.S.-Iran nuclear deal undermining the U.S. ability to work with “our Sunni friends.”
“I've had Sunni leaders and other Arab leaders tell me that -- that -- that same thing,” Votel responded. “And so I know there is -- certainly is a perception out there about and as you know, oftentimes perception is truth in -- in -- in many quarters here.”
Votel emphasized the importance of “building and rebuilding trust with our partners in the region.”
Rep. Jacky Rosen (D-Nev.) asked Votel if Iran has increased its destabilizing activity since signing the nuclear deal.
“Congresswoman, I do believe they have, and I believe that Iran is operating in what I call a grey zone,” Votel said. “And it's an area between normal competition between states and just short of open conflict. And they are exploiting this area in a variety of different ways.
They do it through -- through raising surrogate forces; they do it through lethal aid facilitation. They do it through their own cyber activities and they do it through their influence operations. And I think they -- they are clearly focused in this particular area and I think they have -- their efforts have increased in this particular -- in this particular area.
I think the things that we need to do is -- I think there are three broad things and I've had an opportunity to talk with some of our regional partners about it.
I think we need to look at opportunities where we can disrupt through military means or other means, their activities, particularly their facilitation aspects here. I think we need to look at opportunities where we can expose and hold them accountable for the things that they are doing. That has to be done. They have to account for their destabilize -- the destabilizing role that they are playing in the region right now.
And finally, I think we do have to address their revolutionary ideology. And that has to be addressed and certainly we play a role in that but others in the region do as well. Iran has a role in the region, there's no doubt about that and I want to be clear that we think differently about the people of Iran than we think about the leadership of Iran, the revolutionary council that runs Iran.
In my mind, those are two very distinct things and our concern is not with the people of Iran but it is with their revolutionary government.
Posted by Anjoman nejatiran at 12:32 PM