Regime Change in Iran Is Coming 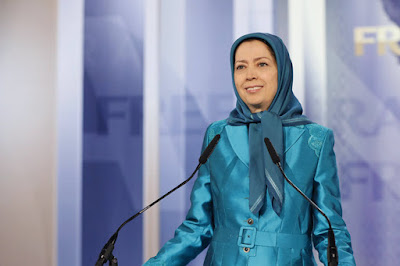 Regime Change in Iran Is Coming

Iran Focus
London, 6 Jul - The Iranian Resistance held their annual Grand Gathering in Paris last weekend, in which they revealed that regime change in Iran was coming sooner than anyone could have predicted.
Over 100,000 activists, politicians, and dignitaries came together in order to support the Resistance’s fight for the freedom of Iran and call on the international community to do the same.
In her keynote speech, Maryam Rajavi, leader of the Resistance, said: “Regime change [in Iran] is within reach because the mullahs have gotten themselves stuck in three wars of attrition in the Middle East. Their withdrawal from these conflicts in whatever form or shape will undermine their own existence.”
The Regime is currently in their worst position of all time; they are in deep financial and political crisis but they have no one to turn to because they burnt bridges with the US, through their use of ballistic missiles and support for terrorism, and other Arab nations, through interference in other nation’s affairs.
Rajavi welcomed the comments from the recent Islamic, American Summit in which the Regime’s destabilisation of the Middle East and support for terrorism.
She said: “We have welcomed the statements made at the Arab, Islamic, American Summit in Riyadh against the Iranian regime’s terrorist and destabilising activities. Nevertheless, we emphasise that the ultimate solution to the crisis in the region and confronting groups like ISIS, is the overthrow of the Iranian regime by the Iranian people and Resistance.”
Rajavi’s recommendations for the international community to help to end the Iranian Regime were:
• Recognising the will of the Iranian people for the overthrow of the Regime
• Expelling the Regime from the UN and the Organization of Islamic Cooperation and inviting the Resistance in their place
• Designating the Islamic Revolutionary Guards Corps (IRGC) as a terrorist organisation
Hamid Bahrami, a journalist and former political prisoner in Iran, wrote an op-ed for Al Arabiya, in which he assessed that the only way to achieve freedom for Iranians is through regime change.
He encouraged the international community to heed the recommendations of the Iranian Resistance and their leader Maryam Rajavi, if they truly wish to see democracy and human rights take its place in Iran.
He wrote: “As the campaign to destroy ISIS is ultimately successful, the most serious threat facing the world and the US president is to confront Iran’s destabilising actions in the region for example in areas in Syria and Iraq that are liberated from ISIS. If the Iranian regime is allowed to usurp these areas then it would pose even a greater danger to the US, Europe and Gulf countries.”
He continued: 2 consequently, to protect their national interests, they are and should look for a solution to stop the mullahs. Until now, their policy has been to accommodate Iran’s actions and evidently it has failed. They hoped to reform Iran’s behaviour by cosying up to President Hassan Rohani but on the contrary, this policy has increased Iran’s intervention in the Middle East. That is why the US and its Arab allies have taken steps to change their policy.”