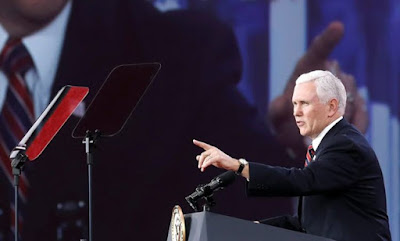 NCRI Staff
NCRI - US Vice President Mike Pence has said that the Donald Trump administration will not recertify the 2015 Iran nuclear deal at the May 11 deadline, which increases the likelihood of US sanctions being reimposed on Iran.
At the Conservative Political Action Conference, Pence said: "The United States will no longer tolerate Iran's destabilizing activities across the region, and this country will no longer certify the disastrous Iran nuclear deal."
Back in January, Trump renewed nuclear-related sanctions relief on Iran for 120 days, but warned that if Congress and the US's European allies couldn’t fix the flaws of the deal, formally known as the Joint Comprehensive Plan of Action (JCPOA), in that time, then the US would withdraw from it altogether.
He said: “Despite my strong inclination, I have not yet withdrawn the United States from the Iran nuclear deal. Instead, I have outlined two possible paths forward: either fix the deal’s disastrous flaws, or the United States will withdraw.”
The fixes suggested by the Trump administration include:
• Scrapping the so-called sunset clauses that allow nuclear restrictions to expire and could mean Iran having a nuclear bomb by 2023
• Getting a deal to stop Iran’s continued use of ballistic weapons
• Setting automatic triggers on sanctions reimposement if Iran breaks the deal in any way
It is unlikely that Congress and the EU will be able to agree on what parts of the nuclear deal need fixing by May 11, let alone actually implementing these changes or getting the other signatories to the JCPOA to agree (Iran, China, and Russia).
The only way to save the JCPOA may be to get an agreement on one part of the deal, and given the destruction caused by Iran’s ballistic missiles in the past couple of years, many want to start with that.
French President Emmanuel Macron already called for the Iranian Regime to enter into talks over its ballistic missile programme, but they have refused.
Joe McMonigle, an analyst with Hedgeye Capital, said: "I think the only chance to save the Iran deal now is if the EU can get some kind of side agreement on ballistic missiles but I think Iran is unlikely to be cooperative."
Indeed, the Iranian Regime has already claimed that their ballistic missiles programme is purely defensive and have rejected any measures to restrict it, but if their programme is purely defensive, then why were Iranian-made missiles supplied to the Houthi rebels in Yemen (in violation of a UN resolution) and fired on Saudi Arabia?