Regime Change Is Only Way to Stop Iran Proxies in Iraq 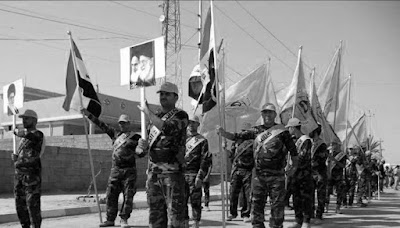 Regime Change Is Only Way to Stop Iran Proxies in Iraq

NCRI Staff
NCRI - When Iraqi Grand Ayatollah Ali al-Sistani issued a fatwa calling on all able-bodied Iraqis to defend their country against ISIS, a 100,000-strong fighting force, known as the Popular Mobilization Forces (PMF), emerged.
The PMF was made up of multiple volunteer Shiite militia groups that filled the void left by the collapsed Iraqi army, but some of these groups hid a dangerous sponsor: Iran.
While all PMF militias are technically under Iraqi control, those Iran-aligned groups still answer to the Iranian Regime and, as such, have done real damage to the safety and security of Iraq in order to expand Iranian influence in the country.
In fact, the Iran-backed PMF forces, who have been working in Iraq since the fall of the Baath regime, may even have been responsible for sectarian atrocities that laid the groundwork for ISIS and the 2006 war between Arab Sunnis and Shiites. They have violently resisted any attempt to disarm them by Iraq and the United States.
Since the fatwa, these Iran-backed militias have exploited the security problems (ISIS, the collapse of the Iraqi army) to consolidate their hold on power and expand Iran’s influence. Worse still, they may even be able to get actual political power in the upcoming Iraqi elections, as Iran proxies like Hezbollah in Lebanon have previously done.
Given that the Iraqi army is now rebuilt and ISIS is gone, many expected that the PMF would dissipate, but the truth is that Sistani cannot simply dismantle the PMF, which provides a livelihood to the fighters not under Iranian control, as it would cause a public backlash and undermine the government.
He is also unable to take on Iran’s proxies alone – even the US failed there- but at the same time the Iranian militias cannot be left to their own devices. No doubt, they will exacerbate sectarian tensions to the point that ISIS resurges.
So what can be done?
Well, Ranj Alaaldin, a visiting fellow at the Brookings Doha Center, wrote on The Atlantic that Sistani should work with other anti-Iran voices in Iraq, like Muqtada al-Sadr, other regional powers, and the United States to contain Iran’s proxies, rebuild Iraq, and reshape Iraq’s political system.
However, the real answer is that the Iranian Regime will not simply give in at the first signs of opposition. The mullahs have proven time and time again that they will continue their malign behaviour no matter what, so the only way to stop them is through supporting regime change in Iran.