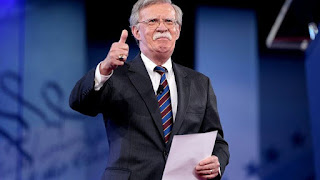 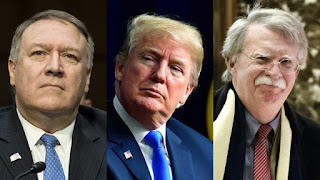 By INU Staff
INU - The Iran Lobby in the US has been losing their minds over Donald Trump’s appointment of former UN ambassador John Bolton as the new national security advisor because of Bolton’s ardent and frequent criticism of the 2015 Iran nuclear deal and the Iranian Regime in general.
Following the announcement, president of the National Iranian American Council Trita Parsi issued a statement lambasting the decision and accusing Bolton of trying to start World War III with Iran.
He wrote: “Bolton is an unhinged advocate for waging World War III. He has explicitly called for bombing Iran for the past ten years… Bolton’s first order of business will be to convince Trump to exit the Iran nuclear deal and lay the groundwork for the war he has urged over the past decade. Additionally, he has called for ending all visas for Iranians, shipping bunker-busting weapons to Israel, and supporting the Mujahedin-e Khalq (MEK) terrorist organization and other separatist groups inside of Iran.”
That’s a lot of lies to pack into one paragraph, so let's unpack those a little bit.
First, it’s hypocritical to accuse Bolton of warmongering when the Iranian regime has launched three wars in Iraq, Syria and Yemen in the past three years. He has never called for nuking Iran, only for serious discussions about strike first policy options if Iran obtains nuclear weapons; a call that has bipartisan support in Congress.
Even his calls to exit the nuclear deal would not lead to war, unless the NIAC believe the Regime would immediately call for war. The deal is merely inadequate to protect the US or the rest of the world form the threat of a nuclear Iran.
Second, the MEK is not a terrorist group. They are part of the organised, democratic, resistance, which is seeking regime change by and for the people of Iran. The only terrorists are those sponsored by the Iranian Regime. Parsi is also attempting to smear the Iranian’s people popular protests by describing them as separatists, rather than an oppressed people rising up against their dictators.
Later on in his statement, Parsi attacks Bolton some more for his support of the MEK without seeming to realise that there is a massive coalition of groups and people opposed to the Regime, including Amnesty International, members of the Bah’ai faith and virtually all Iranian women.
This is merely indicative of how scared that Iran lobby is of the MEK and the people’s protests. The Regime and its apologists attempt to smear the MEK and discredit the information that the MEK gives to the West about the Regime’s malign activities.
But it is the end of the line for the Regime and their lobbyists and frankly few mainstream media outlets are listening to the NIAC anymore.
ایران #تهران #قیام_دیماه#اعتصاب #تظاهرات_سراسری #قیام سراسری  #اتحاد #آزادی#ما براندازیم #نوروز مبارک #آ#ايران