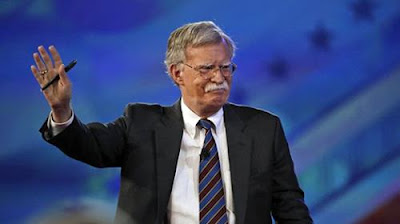 Abdulrahman al-Rashed a veteran and internationally acclaimed journalist, and former General Manager of Al Arabiya News Channel and editor-in-chief of the London-based leading Arab daily Asharq al-Awsat, wrote an article titled: Trump administration in war against who? In Al Arabiya on Mar. 24, 2018, the following is an excerpt of this article.
'We will celebrate with you in Tehran in 2019,' John Bolton said at the Iranian opposition ceremony. 'A sentence echoed in the hall but did not get any attention outside, because its lecturer was just a former ambassador. His serious expression was not merely an interaction with the Iranian opposition, but his convictions, as also was clearly expressed three years ago in the New York Times. Written in an article that sparked a storm of responses 'to bomb Tehran!'
This is the national security adviser appointed by US President Donald Trump as McMaster's successor. By joining the White House team, Trump's opponents have been called a 'war government' because they are mostly generals and conservatives. The post is important, developed with the start of the Cold War and chaired for important issues in meetings attended by secretaries, such as the State Department and the Defense Department, and his office located in the President's pavilion of the White House, who provides summaries of cases to the president.

Bolton himself is a well-known figure of hard-line positions, a school that believes in a strong America, at a time when Russia and China are at its expense. Small powers such as Iran and North Korea have threatened its security, interests and allies.
Bolton's opponents do not want to discuss issues like Iran and North Korea because they can not win the argument, and therefore they resort to targeting him with personal charges, he is racist, and he is against Muslims. In fact, these descriptions are used informally in the assassination of characters.
He wants to overthrow a regime that wears Islamism - the mandate of the Islamic jurisprudent in Iran, against Hezbollah and against the North Korean government led by Kim Jong-un.
That is why my Muslim readers, who disagree with Bolton's opinion on these issues, should raise their hands! In my opinion, the majority of three hundred and fifty million Arabs and Iranians are like Bolton They see the same thing. Even if my estimation is wrong, Mr. Bolton's positions are that of a broad segment of the Middle East population, all of us are against extremism and extremists, both Muslim and non-Muslim. Those who accuse Bolton of racism and Islamophobia are the Khomeinists, the Brotherhood and the Western Left.
For Bolton's promise to celebrate in Tehran in 2019, it is likely that Bolton will not be celebrating on time, that is, to overthrow the regime of the Wilayat al-Faqih. But the government of Tehran, since the first day, when Trump announced the appointment of Bolton as the national security adviser is in a state of anxiety and distrust. Now Iran sees that its trick to flex the Europeans with small concessions will not succeed in stopping the 'bulldozer' President Trump in his march on Tehran.
For us in the Middle East region, despite chaos and destruction, the orderly overthrow of the Iranian regime is an ideal solution to ending the era of chaos that Khomeini had cut its ribbon in 1979. He, together with radical Islamist groups, and other regional regimes collaborating with him led the region to a series of crises, lasting almost forty years, and brought the whole world into fear and uncertainty.
However, not even successful in raising expectations, my article is not misunderstood, the possibility that Trump and the government of hawks which he is leading, engage in a direct war on Iran is unlikely according to current crisis 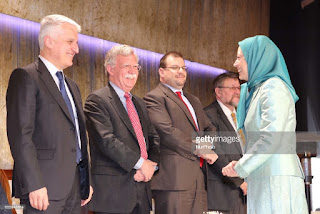 But the administration would be shocked by it if Tehran's regime erred and dared to do what it did against the former US administration when the American sailors were seized and humiliated on television before the world. A foolish step like this could lead to war, and we know that the foxes of Tehran despite their many adventures, fear the mighty.
Germany and France will not succeed in softening Trump's head, nor the rest of his hard-liner heads of ministries; his adviser Bolton, his new foreign minister, the director of his new intelligence agency, or his defense minister.
Trump's enormous pressure will increase on Iran, and its allied forces and organizations in Iraq, Lebanon, Syria, Sudan and Yemen. The administration is likely to push its efforts to rid the Iraqi government of Iranian infiltration into its institutions, forces and security and financial apparatuses.
The pressure will reach Lebanon, to dwarf Hezbollah, and even more to ideological groups such as the Muslim Brotherhood and to end the actions of adolescent Qatar, Its clumsy policy with the four countries and its alliance with Iran and Turkey against it. I am seeing closer, what I thought was far away.