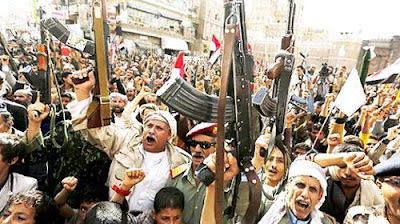 LONDON:ARAB NEWS, Monday 26 March 20 18--  Sophisticated improvised explosive devices camouflaged as rocks are Iran’s latest contribution to Houthi forces in Yemen, according to a report by a weapons-tracking group.
Based on six missions to Yemen over the last year, and comparisons with similar devices documented elsewhere in the Middle East, Conflict Armament Research (CAR) said the radio-controlled bombs were evidence of a “recent influx of technology.”
“Improvised weapons used by Yemen’s Houthi forces have been manufactured using the same, identically configured components as those recovered from Iranian-backed groups in Bahrain,” said James Bevan, executive director of the group. “CAR’s latest findings confirm consistencies in Iran’s military support, not only to Houthi forces but also to its proxies across the wider region.”
The Saudi-led coalition intervened in Yemen in 2015 against Iran-aligned Houthis after they seized control of the capital and other provinces, forcing the government to flee. The civil war has killed an estimated 10,000 people and displaced more than 2 million people.
CAR, based in the UK, said most IEDs found in Yemen were rudimentary in design but there was an increase in more sophisticated devices. Its report presented comparative findings on explosively formed projectiles (EFPs) documented by CAR in Yemen and similar devices documented by field investigation teams elsewhere in the Middle East.
The IEDs recovered in Yemen featured EFPs, which were camouflaged to resemble natural rocks. These devices were armed by radio control and initiated using passive infrared switches, so they could be classed as RCIEDs.
CAR also found that the EFPs concealed in synthetic rocks resembled in design and construction other devices recovered in Iraq and Lebanon and which had been forensically linked to Iran.
“Multiple strands of evidence suggest that Iran orchestrated the transfer of technology and materiel to Houthi forces in Yemen to assist in the manufacture of RCIEDs,” the report, published today, said.
CAR said material it seized in Yemen was identical to components previously taken from the Jihan 1, an Iranian ship laden with arms and seized by Yemeni authorities in 2013. US and Yemeni officials said it carried a large cache of weapons, including surface-to-air missiles being smuggled from Iran to insurgents in Yemen.
“This confirms widespread assertions that the vessel was destined for Houthi forces in Yemen and would suggest that Iranian support to Houthi forces began as early as January 2013,” the report said.
CAR also pointed to large-scale production, saying that “identical construction, and the use of hand-annotated, serialized components, suggest that the electronics kits used in the Yemen RCIEDs were constructed in bulk and potentially in the same workshop.”
Tim Michetti, CAR’s head of regional operations for the Gulf, said the presence of these EFPs should not be a surprise given they had been found in other conflict areas. “The underlying thread connecting them is Hezbollah or other Iranian proxy groups,” he said.
The supply of weapons from Iran to Yemen has escalated tensions between Arab countries and Tehran.
Saudi Arabia and the US accuse Iran of exporting ballistic missiles to the Houthis, which are then fired at the Kingdom. In December, the US presented fragments from missiles fired at Riyadh’s King Khalid International Airport in November, which it says came from Iran in violation of UN resolutions.
Previous research by CAR has provided evidence of shipments of weapons on dhows from Iran to the Houthi militias.