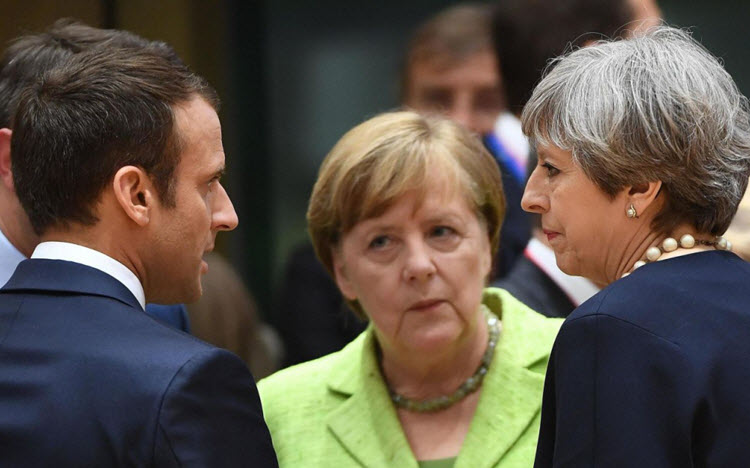 NCRI Staff
NCRI - The UK, France, and Germany proposed new sanctions on Iran to their EU partners on Wednesday, as part of a bid to stop Donald Trump from pulling out of the Iranian nuclear deal in May.
These sanctions, which were discussed by the EU's 28 ambassadors, are believed to target Iran's Revolutionary Guards Corps (IRGC), a powerful militia that answers only to the Supreme Leader, with travel bans and asset freezes.
Although no specific names were mentioned at the meeting, a list of 15 Iranian individuals and companies was circulated to EU governments beforehand.
These sanctions would not be ones that were lifted under the nuclear deal, but would instead be levied in relation to Iran regime’s ballistic missile programmes and its support of Dictator Bashar Assad in the Syrian civil war.
Any Iranians named in the sanction would also be banned from doing business with EU companies.
The three European signatories to the 2015 nuclear deal need to fix its flaws before Trump’s May 12 deadline or Trump will end the existing sanctions relief of Iran. It is unlikely that the EU will agree to fix those flaws in time, but Britain, France and Germany hope that these additional sanctions will buy them more time.
Not all the EU countries could agree and sanctions will continue into next week.
A decision is likely to come sooner rather than later, as the last formal gathering on the EU agenda before May 12 is the EU foreign ministers' meeting in Luxembourg on April 16.
One diplomat said: "The idea is to have a final decision on Iran sanctions by or at the April Foreign Affairs Council."
But another diplomat said that it would take more time to convince all EU members states to agree to the sanctions. This could mean that the EU will have to convene an interim meeting in late April or early May.
Previous Meetings
When the EU foreign ministers met last week in Brussels, they also discussed sanctions against Iranian regime for its role in Syria's seven-year war.
France’s Jean-Yves Le Drian urged them to also consider sanctions on Iran for its "proliferation of ballistic missiles and very questionable role in the near- and Middle East."
Evidence of this can be seen in the missile attacks against Saudi Arabia by the Iran-backed Houthi rebels, which killed a man in Riyadh on Sunday. It is believed that, as in previous attacks, the missiles are Iranian made and may have even been directed by Iran.