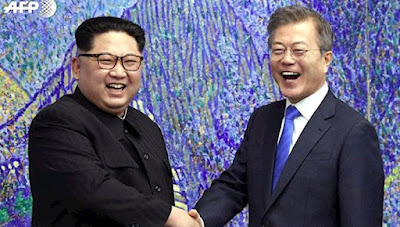 April 29, 2018-- Iran is expressing grave concerns over the determination of the North Korea nuclear dossier and such a finale being completely against its interests.

South Korean President Moon Jae-in talks with North Korean leader Kim Jong Un on a bridge next to the Military Demarcation Line at the truce village of Panmunjom on Friday.

The state-run Arman daily ran a piece on Sunday saying very specifically:
“On the brink of an increasing number of hardliners such as John Bolton and Mike Pompeo entering [U.S. President] Donald Trump’s decision-making team, North Korean leader Kim Jung Un made a visit to China and announced a new policy that came as a shock for the world over. He first spoke of suspending North Korea’s nuclear and missile tests, going on to discuss a path of his country’s economic and progressive growth…
“The meaning of these remarks and the truth behind Kim Jung Un’s decisions remains a mystery. North Korea went to the negotiating table during Bill Clinton’s presidency. However, two years after America going back on its promises, [Pyongyang] took advantage of the situation and distanced itself from the talks.
“Furthermore, Kim Jung Un’s initial emphasis on confronting Donald Trump and continuing his nuclear/missile development despite emphasis otherwise – reaching a point where the U.S. and North Korea were on the verge of nuclear war – has left all parties surprised of Pyongyang’s decisions.
“In such circumstances, any flexibility shown by North Korea will be considered a success for Donald Trump… This provides increasing self-confidence for Trump to demand Europe impose more pressure on Iran. As a result, Trump’s America is interested in advancing and thrusting the waves of optimism in regards to the North Korean leader’s cooperation with the U.S…
“To this point, if the flexibility shown by the North Korean leader is a tactical measure to gain global attention, it has been successful in the face of White House hardliners. This, however, will add to Donald Trump’s stronger tone against Iran.
“Until yesterday the North Korea crisis was the world’s number one issue. Today, this subject has been set aside from the global agenda and Iran has become priority number one. This is leading to increasing expectations of cooperation from Iran among the international community. Otherwise, considering the trend adopted by American hardliners, a faceoff with Iran is no longer an unexpected scenario.
“In circumstances where club-wielders and bullies have entered the ring, the first solution is not always the best. One can easily thump their chest in response, while we can also follow the footsteps of China and North Korea, and buy time.”