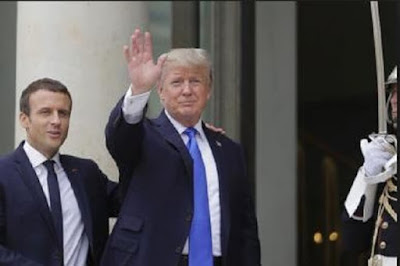 
Washington, AFP, 24 April 2018 - French President Emmanuel Macron and his American counterpart Donald Trump called jointly Tuesday for a new nuclear deal with Iran after the US leader denounced the three-year-old accord as "insane."

"I can say that we have had very frank discussions on that, just the two of us," Macron told a joint press conference with Trump at his side.

"We, therefore, wish from now on to work on a new deal with Iran."

Trump's European allies have repeatedly tried to persuade him not to walk away from the 2015 deal, which gave Iran massive sanctions relief and the guarantee of a civilian nuclear program in return for curbs on programs that could be used to develop an atomic weapon.

It did not tackle western complaints about Iran's ballistic missile programs or support for militant groups across the Middle East.

Trump faces a May 12 deadline to decide its fate and is demanding changes that many in European capitals believe would represent a legal breach.

"I think we will have a great shot at doing a much bigger, maybe, deal," said Trump, stressing that any new deal would have to be built on "solid foundations."

"This is a deal with decayed foundations. It's a bad deal, it's a bad structure. It's falling down," the US leader said. "We're going to see what happens on the 12th."

When asked to clarify if he meant he was pushing for a new accord, or an add-on agreement, Macron said: "I'm not saying that we move from one agreement to another."

The French president said a new deal would have to include three additional elements: Tehran's ballistic missile program, its influence across the Middle East, and what happens after 2025 -- when under the current accord Iran would be able to progressively restart part of its nuclear program.

He called the initial 2015 deal only the "first pillar" of an eventual wider deal.

For months, American and European officials have been working behind the scenes to try to find a compromise over Trump's demands to change the agreement.

Officials have toyed with the idea of a separate joint declaration: promising to tackle non-nuclear issues, while searching for a tougher successor accord.

Iran, meanwhile, has warned it will ramp up enrichment activities if Trump walks away from the accord, prompting Trump to issue a blunt warning.

"They're not going to be restarting anything. If they restart it, they're going to have big problems, bigger than they ever had before. And you can mark it down," the US president said.