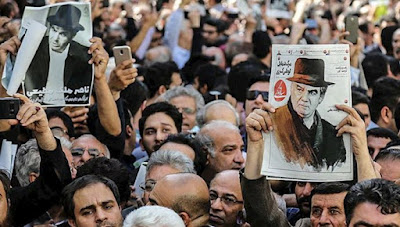 IRAN: May 28, 2018 - Naser Malek Motiei, an Iranian actor and director who starred in numerous films and television shows, passed away on Friday, May 25th. He was 88 years of age.

Motiei was first a sports instructor and began his work as an actor in the early 1950s. In addition to playing in around 100 movies, Motiei was also very active in theater and enormously popular amongst Iran’s poor class for his chivalric roles.
Following the 1979 revolution in Iran, Motiei was a target of the Iranian regime’s censoring due to his unwillingness to promote the mullahs’ mentality.

Motiei began a pastry business due to the pressures imposed by the mullahs’ apparatus. He was deprived of any and all access to the profession he loved and the Iranian regime would never provided him the necessary authorization.
“I loved the cinema. I loved my work for forty years. Nothing ever distanced me from the cinema. I can’t fight against my destiny, and yet my heart has always been with the people,” Motiei once said in an interview.
A ceremony held for Motiei on Sunday literally evolved into a massive anti-regime demonstration with protesters seen chanting “Death to the Dictator” and “Our state media is our disgrace.”
State police on foot and motorcycles resorted to vicious measures of attacking the protesters. Demonstrators responded by chanting “Shame on you” and “The police are our disgrace.”
The body of this popular actor was buried in the artists’ section in Tehran’s famous Behesht-e Zahra cemetery.