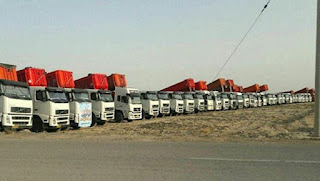 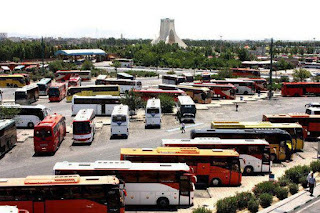 On Sunday, May 27, the nationwide strike of truck and heavy vehicles drivers continued for the sixth day in spite of threats, pressures and repressive measures.
In the past days, the intelligence henchmen have summoned drivers from different classes to pressure them to end the strike and to announce it in the cyberspace. In Sabzevar, the head of State Security Forces threatened to prevent drivers from driving in all the roads of the country should they continue their strike. In some cities, such as Hamedan and Tehran, the police insult drivers and fine them for unfounded offences.
In spite of these repressive measures, the freight terminals in various cities are half-closed, and drivers refuse to load and with lining up their trucks along the roads, demand for a solution to their problems. In Akbarabad Kovar (Fars province), 400 trucks drove to Shiraz while honking in support of the strike. In Ardabil, truckers prevent passage of loaded vehicles. In Ilam, the IRGC moves fuel using municipal vehicles and escorts.
On Sunday, Taxi drivers and taxi owners in Tehran, in solidarity with truckers’ strikes, protested against low fares and expensive spare parts. In Yazd, minibus owners also gathered in protest over expenses and in solidarity with striking truckers in front of the municipality.

Secretariat of the National Council of Resistance of Iran
May 27, 2018