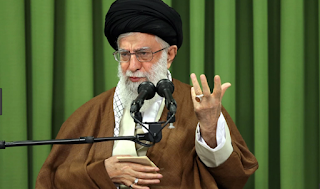 INU - Iran’s Supreme Leader Ali Khamenei is currently attempting to play down the US’s withdrawal from the 2015 nuclear deal and subsequent imposition of sanctions against Iran by comparing the situation to an episode of the popular children’s cartoon Tom and Jerry.
In this cartoonish (literally) analogy, the US is Tom, the cat who has spent his entire life trying and failing to catch the mouse Jerry (Iran). In some ways, this is correct. For nearly 40 years, the US has failed to stop Iran’s malign behaviour by pursuing an appeasement policy which culminated in the flawed Iran deal.
However, it also shows that Khamenei believes this whole matter to be a game, despite the fact that lives hang in the balance. It should be no secret that Iran’s leaders don’t care how their actions affect ordinary Iranians or the rest of the world, but it’s a little shocking to see it so displayed so blatantly
One thing that the world can take away from this as a positive, is that the US is ramping up pressure on Iran through sanctions and we might soon see the cat get the mouse.
Of course, the cartoon analogy is far too simplistic to actually apply to the US-Iran situation.


The Iranian Regime is not outwitting the US in a chase, but destroying an entire region as countries try to stop it. They are using proxy groups (i.e. Hamas, Hezbollah) to stir up conflict across the Middle East, by training and arming the terror cells to attack Iran’s enemies. They are allying themselves with terror cells like al Quaeda and corrupt states like Russia and China.
So, what will happen next?


Well, now it seems that the US has a great understanding of the Iranian Regime and the threat it poses, which means they are more likely to do something about it. They now see that the Regime is evil, which hopefully signals the beginning of the end for Iran.
Source: AL Arabiya