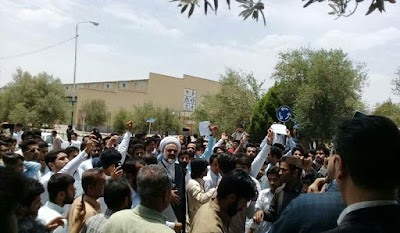 Mrs. Rajavi salutes the risen youth of Zahedan and calls on other youths to support them
On Saturday May 25, students at Zahedan Azad University protested against insulting and humiliation of Baluchi citizens and Sunni Muslim rituals, many groups of Zahedan people joined the protest by chanting "Do not be afraid, we are all together." And carrying banner read “No to religious and ethnic insults.” Anti-riot security agents arrested a number of students at university attacks.
Mrs. Maryam Rajavi, President-elect of the Iranian Resistance, saluted the noble Baluchi compatriots and students and youth who have risen in Zahedan today, and said: "Shame and hatred for the clerical regime, which is the main source of discrimination and disunity in Iran today." She called all of the youth, especially in Sistan and Baluchestan province, to help and express solidarity with the students and youth of Zahedan.
Secretariat of the National Council of Resistance of Iran
May 26, 2018