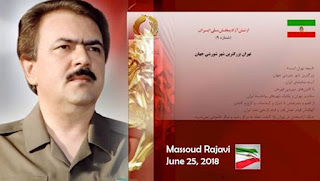 Iran, June 27, 2018 - As protests and strikes expand across the country and Iran’s regime has increasing concerns, Iranian Resistance leader Massoud Rajavi issued a message on June 25 aired on INTV hailing the brave protesters in Tehran and other cities.
“The liberation war in Tehran has escalated. The fire has reached the capital and will never be put out,” he said.
“Overthrow and regime change have been the Iranian Resistance’s sole guidelines and policy from June 20th, 1981, to this day… We have said and repeat today that overthrowing and regime change is our duty and task, and on the shoulders of us, our people and our nation’s revolutionary vanguard… with revolting cities and teams…”
Massoud Rajavi reiterated four decades of struggling for freedom, equality and independence from 1979 to this day and said: “38 years ago the branches of the People's Mojahedin Organization of Iran (PMOI/MEK) were closed in different cities of Iran by [Iranian regime founder] Khomeini. Today, however, the PMOI/MEK’s offices have reopened everywhere under the framework of revolting teams, visible in all streets and alleys…”