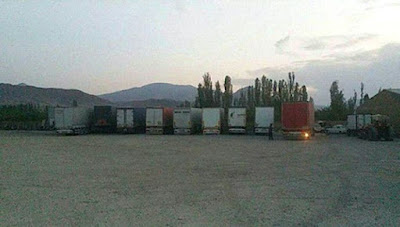 Iran, July 24, 2018 - Truck drivers continued their nationwide strike for the second consecutive day on Tuesday in cities across the country. Images and videos of this protest from the cities of Qazvin, Zahedan, Chalus, Farrokhshahr, Isfahan, and Yazd have been posted on the internet.
In Mashhad, truck drivers neglected any deceptive promises provided by regime officials and authorities. Officials were seen selling low-cost tires at the city loading terminal center and resorting to a variety of propaganda measures aimed at discouraging drivers into ending their strike.
Truck drivers in Isfahan were seen protesting those drivers breaking their ranks, demanding they continue their strike.
This new round of the truckers’ strike began on Monday in many cities and towns across the country. Many provinces, including Tehran, East Azarbaijan, Kurdistan, Isfahan, Fars, Semnan, Qazvin, Kerman, Kermanshah, Lorestan, Central (Tehran), Khorasan Razavi, Chahar-Mahal & Bakhtiari, Khuzestan, and Hormozgan were scenes of such strikes.
Two months the truckers strike lasted around two weeks, engulfing all 31 provinces of Iran. The drivers were refusing any loads and protesting their poor living conditions, low wages, high logistical costs, and vehicle leases
The mullahs’ regime resorted to repressive and/or deceptive measures attempting to end this strike. A number of drivers were arrested, threatening the strike organizers, setting fire to the striking drivers’ trucks, using army trucks and resorting to false promises of increasing the drivers' pay was only a number of these measures.
The anti-popular policies adopted by the mullahs, destroying the country’s economy, are further plaguing the lives of truck drivers across the country. In addition to skyrocketing prices and increasing inflation, these drivers are also suffering from escalating commissions demanded by various officials and authorities.
The Iranian Resistance hails the protesting truck drivers and calls on all the country’s youth to rise in solidarity with the drivers. International organizations, syndicates and truckers/labor unions throughout the globe are invited to support Iran’s truck drivers and condemn the mullahs’ inhumane policies.