IRAN’S PROBLEMS ARE NOT WITH TRUMP, BUT ARE INSTEAD WITH THE REGIME 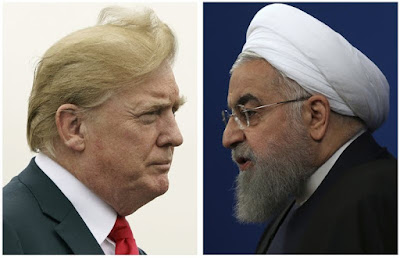 IRAN’S PROBLEMS ARE NOT WITH TRUMP, BUT ARE INSTEAD WITH THE REGIME

Donald Trump’s latest tweet on Iran – an all-caps warning to Iranian President Hassan Rouhani about threatening the US – has generated worldwide attention. Some may have written this off as Trump being Trump until the tweet was endorsed by his national security adviser John Bolton and now it is being seen as an official declaration of US policy on Iran.
Trump tweeted: “NEVER, EVER THREATEN THE UNITED STATES AGAIN OR YOU WILL SUFFER CONSEQUENCES THE LIKES OF WHICH FEW THROUGHOUT HISTORY HAVE EVER SUFFERED BEFORE. WE ARE NO LONGER A COUNTRY THAT WILL STAND FOR YOUR DEMENTED WORDS OF VIOLENCE & DEATH. BE CAUTIOUS!”
To be clear, there’s a lot of reasons why the US would need to warn Iran about ending its threatening behaviour against a country that it calls the “Great Satan”. Iran has been abducting US citizens and dual nationals, threatening to disrupt global oil supply by closing key shipping lane the Strait of Hormuz and has even attacked US troops, allies, and interests in the Middle East in its proxy wars. As recently as last year, the Regime was ordering attacks on US boats in the Persian Gulf, which equated to roughly 2.5 unsafe incidents per month.
Iran has yet to issue an official response to the tweets, with only foreign minister Javad Zarif tweeting a somewhat awkward reply which basically called Trump’s tweet uncivilised, while attempting to parody it. We can expect a harsher response from the Revolutionary Guards and the supreme leader in the coming days.
Still, it would be wrong of us to imply that the Iranian Regime’s response in any way reflected the Iranian people’s view on the matter.
The Iranian people have been involved in a nationwide uprising against the Regime since December 2017 and they welcome the strong US policy on the Regime, including the nuclear-related sanctions that will begin springing back into place on August 6.
The Iranian economy is already fixed in favour of the mullahs, leaving the people to starve whilst the Supreme Leader and his cronies line their pockets and fund terrorism and warfare across the Middle East and the world. If the US sanctions bankrupt the Iranian economy, it will take the mullahs down much more heavily than it will the people and this will allow the people to achieve their desire of regime change by and for the people of Iran.
The Iranian people are protesting the Regime on a number of issues from air pollution to human rights to the economy, but they see that the mullahs are at the center of all of these problems and that getting rid of them will allow the people to fix the problems.