MATTIS: TRUMP’S TWEET SENDS MESSAGE THAT IRAN IS “ON THE WRONG TRACK” 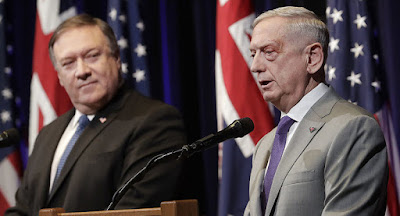 MATTIS: TRUMP’S TWEET SENDS MESSAGE THAT IRAN IS “ON THE WRONG TRACK”

By INU Staff
INU - Defense Secretary James Mattis said on Tuesday that Donald Trump’s all-caps tweet to Iranian President Hassan Rouhani was meant to show that Iran is “on the wrong track” and highlighted exactly what the Regime was doing wrong.
Mattis told reporters at the Hoover Institution in Stanford, California: “I think what we have to look at is the destabilizing influence that Iran has consistently displayed and demonstrated throughout the region.”
Mattis, who has been meeting with Austrailian officials alongside Secretary of State Mike Pompeo, said that he believed “the president was making very clear that they’re on the wrong track.”
He said: “The only reason that the murderer [Syrian President Bashar] Assad is still in power — the primary reason — is because Iran has stuck by him, reinforced him, funded him. We see the same kind of malfeasance down in Yemen where they’re fomenting more violence down there. We’ve seen their disruptive capabilities demonstrated from Bahrain to the Kingdom [of Saudi Arabia], and it’s time for Iran to shape up and show responsibility as a responsible nation.”


Indeed, the Iranian Regime is involved in many conflicts across the Middle East that are contrary to US interests, from keeping the “animal” Assad in power in Syria to supplying weapons and ballistic missiles to the Houthi militants in Yemen. These missiles have been used to target US ally Saudi Arabia in this four-year-long conflict, who is not only leading the US-backed coalition to restore the Yemeni government but is also one of Iran’s many foes.
Mattis said: “[Iran] cannot continue to show irresponsibility as some revolutionary organization that is intent on exporting terrorism, exporting disruption across the region.”
Trump’s tweets
On Sunday, Trump tweeted: “To Iranian President Rouhani: NEVER, EVER THREATEN THE UNITED STATES AGAIN OR YOU WILL SUFFER CONSEQUENCES THE LIKES OF WHICH FEW THROUGHOUT HISTORY HAVE EVER SUFFERED BEFORE. WE ARE NO LONGER A COUNTRY THAT WILL STAND FOR YOUR DEMENTED WORDS OF VIOLENCE & DEATH. BE CAUTIOUS!”
This was in response to Iran’s threat of the “mother of all wars” if the US continued to act against the Regime by cutting off its oil exports.
Neither Mattis nor Pentagon spokespeople have said whether the US forces based in the Middle East will be adjusting their strategy because of this war of words. However, the commander of the US Central Command in Bahrain has previously said they would be countering Iran’s threats, while Pentagon spokeswoman Rebecca Rebarich said on Monday that US forces “are more than capable at defending themselves should the need arise.”