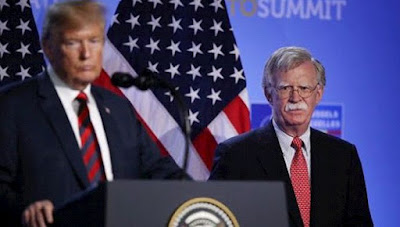 July 27, 2018 - US National Security Advisor John Bolton chaired a National Security Council meeting on Thursday, including Pentagon and other senior officials, to weigh the Trump administration’s Iran strategy. This comes just four days after US President Donald Trump sent a strong, all-caps warning to Iranian regime President Hassan Rouhani.
Members of the administration’s Bolton-chaired Principals Committee focusing on national security issues, including Defense Secretary James Mattis, Joint Chiefs of Staff Chairman Gen. Joseph Dunford, Secretary of State Mike Pompeo and other senior officials, are said to have participated.
Word is that this would be only the third time Bolton has convened such a group meeting after assuming his post’s responsibilities in April.
Uncertain is if the Pentagon will place on the table any military options against Iran, as in the past the Defense Department has provided limited options, including preventing the Iranian regime from transferring arms and military equipment to the Houthis in Yemen.
Trump has favored steps to counter the Iranian regime’s “destabilizing activity and support for terrorist proxies” across the region.
Following Trump’s pullout of the highly flawed 2015 Iran nuclear deal, Sec. Pompeo blueprinted 12 conditions the Iranian regime has to meet before any possible talks are taken into consideration. All the while, sanctions targeting Iran’s regime are returning first in early August and again on Nov. 4, severely threatening the regime’s oil revenues.