A National Disaster: “Thoughts of Suicide Is Now Common in All Classes of Iran’s Society” 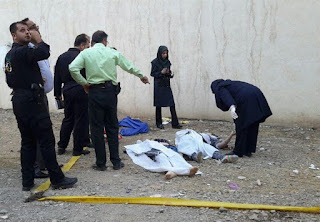 A National Disaster: “Thoughts of Suicide Is Now Common in All Classes of Iran’s Society”

24 September 2018.
By Mohammad Sadat Khansari
In Iran, the growing disaster of suicide is now prevalent in all kinds of people and across many areas, especially in the more vulnerable ones.
Despite its inaccurate figures, Behdasht News strongly acknowledges the increase in the reported numbers of suicide: “In 2016, there has been 4627 cases of suicide, which is 5% more than that of 2015”.
Another state-run newsagency named ISNA (August 24th, 2018) also comments in this regard, in an article titled “inaccuracy of the reported rates of suicide in our country”, emphasising that the actual numbers of suicide must be at least 3 times that of the reported ones: “The only source of the reported suicides, is our Medical Jurisprudences, which is often unreliable; because, they worry that by reporting the actual numbers of suicide, not just the social outlook but also the insurance-related services will be impacted. Therefore, the actual numbers of suicide must be at least 3 times more than the reported figures”.
The witnessed tsunami of suicide and self-immolation across various cities of Iran, are all resultant from poverty, homelessness, addiction, prostitution, and overall, the widespread oppression of young Iranians, especially many girls and women.
Such disasters without a doubt stem from the 4-decade-long dictatorship of this regime. It is sad to see that in a country so rich in oil and other natural resources, young people are burning in poverty, unemployment, and economic problems; and that instead of having any hopes, they seriously fear their future; so much so that they see no other way but to take their own lives.
Mashregh News also discusses these issues (June 29th, 2018), adding that “Not only the low-literate, but even the educated class and high-achieving students are increasingly taking their own lives, because of the growing pressure of the our economic and financial issues”.
Moreover, KhabarOnline published an article titled “Iran is in a suicide crisis”, in which it confesses that “Our social experts believe that the main reasons behind these suicides are unemployment and economic pressure. At least two-third of these cases have been men over 25 years of age; clearly, Iran is in a crisis now”; adding that “the suicide rate of the province of Kermanshah, has gone up very significantly! Which is mostly due to last year’s earthquake and the economic issues that followed thereafter, which heavily affected its people. Last year alone, there were 209 suicides in this province”.
In addition, Salamat News writes about the observed patterns of depression and hopelessness amongst Iranians (August 5th, 2018): “In a happy society, no one would even think of suicide! Unfortunately, our society has no reason to be happy, because there’s no long-term solution to any of the issues”.
ILNA adds (May 25th, 2018): “Where do we hear any music or laughter in our country? There is no happiness here whatsoever! Our individual and social beliefs are mostly inclined towards sadness here”.
IranOnline also released an article titled “teenagers who welcome death” (August 5th, 2018), in which it describes: “The reported news over the past several years indicate that suicide no longer pertains to just adults (of over 18 years old), and that it is also becoming increasingly prevalent amongst children and teenagers – in as young as 10, 12 and 15 year-olds, who clearly can’t handle their personal excitements or their external social pressures”.
Mohammad Sadat Khansari is a researcher analyst and consultant, specializing in Human Rights, political and social affairs. He has expertise in Iran, and the Middles East affairs.