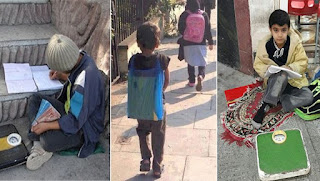 Illiteracy rampant and growing among Iran’s women and girls

Over 50 per cent of university graduates in Iran are young women. Ironically, more than 60 per cent of the country’s 9.5 million illiterates are also women. On the International Literacy Day, September 8, the situation of illiteracy among Iranian women and girls merits attention.
Education is neither mandatory nor free in Iran
Education is mandatory and free in most countries of the world for 6-14 age group and UNESCO has underlined the need for mandatory education for children.
According to Principle 30 of the Iranian Constitution, “The government is obliged to provide free elementary and high school education for all members of the nation and facilitate free higher education for all until the country is self-sufficient.”
With some 9.5 million illiterates, Iran ranks 120th on the world's literacy scale.
Ali Bagherzadeh, deputy Minister of Education and head of the Literacy Movement Organization, however, revealed at a conference at the Ministry of Education that education is not mandatory in Iran. (The state-run Salamatnews.com, April 25, 2018)
Bagherzadeh also confessed that the criterion for literacy in Iran is still the sole ability of reading, writing and counting, whereas in other countries, this criterion has improved to include much more.
The clerical regime’s economic bankruptcy is a factor contributing to illiteracy. In the past few years, Rouhani has ordered shut-down of many schools in rural communities as a way for budget cuts.
The regime has also been gradually expanding its demands for tuition from students and their families, further contributing to school drop outs.
University students have been protesting such demands by universities.
Masters students of the University of Orumiyeh held a three-day protest, February 14-17, 2018, against the policy of demanding tuition from students.
On May 9, 2018, the students of Orumiyeh University spread empty table cloths on the ground in protest to a plan for charging students for course units.
Orumiyeh is the capital of West Azerbaijan, in northwestern Iran.
Students of Tehran's Allameh Tabatabaii University staged a protest on April 29, 2018, and spoke out against the policy of Rouhani’s government to obtain tuitions from college students. They held placards which read, “No to college tuitions”, “Allameh U is an economic firm”, etc.
Students of Tehran’s University of Art also held a protest on February 17, 2018, against the policy of receiving tuition from students.

Controversial official statistics on illiteracy
Statistics on literacy or illiteracy in Iran are both scarce and not accurate. Regime officials usually provide contradicting figures, mainly to play down the gravity of the situation.
Speaking at the Alephba Studio, Ali Bagherzadeh told the state-run media and press, that based on the census done in 2016 in Iran, the number of illiterates in the 10-49 age group was 2.3 million, 60 per cent of whom are women. That is 1.38 million women. (The state-run Salamatnews.com, April 25, 2018)
In another interview published by the state media on March 31, 2018, the same official had said, “There are some 2.7 million illiterates between 10 and 49 years of age in Iran, nearly 1.8 million of whom are women.” (The state-run ILNA news agency, March 31, 2018)
On the number of illiterate children, the statistics collected in 2006 and published ten years later in the state press in 2016, indicate that there are over 3.2 million children deprived of education in Iran. (The state-run Mehrkhaneh website, December 5, 2016)
Whereas earlier, the parliamentary Research Center had published the figure of 4 million for the number of school drop-outs in 2015.

Alarming illiteracy rates in Iranian provinces
According to Iran’s Statistics Centre, there were 9,483,028 illiterates in Iran in 2011, 6,250,965 of whom were women, which is approximately two-thirds of the total population of illiterates.
Every year, at least a quarter of Iran's students are forced to quit school with a large number of them joining the children of labor, whose population is estimated to be around 3 to 7 million today.
Drop-out of girls older than 6 years of age is widespread in the provinces of Sistan and Baluchestan, Khuzestan, Western Azerbaijan, and Eastern Azerbaijan, comprising the country’s highest rate of illiteracy just by themselves. (The state-run Khabar Online website, November 18, 2015)
The number of girls dropping out of school in western Khuzestan Province and other cities on the Iran-Iraq border has been reported as alarming.
According to a report published in 2015 by the presidential Directorate on Women and Family Affairs, the illiteracy of women and girls in Iran is alarming and the situation is critical in some 40 cities.
In a meeting at the mullahs’ Parliament on December 16, 2015, Zahedan’s deputy announced that 156,000 girls in Sistan and Baluchestan have been excluded from receiving any form of education. (The state-run Mehr News Agency, December 6, 2015)
The director of the Education Department of Dezful, located in Khuzestan Province in southwestern Iran, said, girls comprise 60 per cent of 500 students who have been deprived of going to school over the past three years.
Hormozgan province in southern Iran has 14,000 school drop-outs.
In spring of 2015, the Director of Education in Western Azerbaijan reported 1,500 cases of school drop-outs. On January 7, 2016, he indicated that there has been a 6-fold increase in the number of drop-outs since last year.
In a council session on illiteracy at the Governor’s Office in Boroujerd, Reza Ariayi said, “Over 117,000 people in Lorestan Province are illiterate, most of whom are women and villagers. The population of Lorestan is 1,750,000. The ratio of illiterates for this population is very high.” (The state-run Tasnim news agency– July 23, 2014)
Not only girls are dropping out of school in Iran’s disadvantaged provinces, but Tehran and its surrounding cities are also experiencing an increased rate of female drop-outs.
In October 2015, the director-general of Tehran’s Department of Education disclosed that 25,000 school-aged children in this city are working instead of attending school.
Shahindokht Molaverdi, former presidential deputy on Women and Family Affairs, told a seminar, "The 82% illiteracy rate makes it much more difficult for (female heads of household) to find a job, which has led to their poverty. In such conditions, they are subjected to social damages." (The state-run ISNA news agency, TNews.Ir, October 10, 2015)

Reasons for illiteracy among women
In some Iranian provinces, the percentage of illiteracy is over 30 per cent and a considerable number of children under 17 do not have the opportunity to continue their education. The parents of most of these children are illiterate, themselves, and there is a meaningful correlation between the level of education of parents and children who drop out of school.
Poverty of families and not affording to pay for their children’s education, child participation in the family’s economic activities, seasonal immigrations, and lacking registered birth certificates, are among the reasons children are deprived of going to school. These reasons are more acceptable among families when it gets to girls.
Mixed-gender high school classes are also among the reasons girls have to quit school in some regions. In some provinces, early marriages prevent girls from continuing their education and many families need their daughters to help them in earning the family’s income.
Abbas Soltanian, deputy for mid-level education in the Ministry of Education, announced that the drop out of girl students exceeded 151,000 in 2017-2018 academic year. (The state-run ILNA news agency - June 25, 2018)
Referring to the data on the drop out of girl students in schools across the country, he noted, "This academic year, from October 2017 until June 2018, there have been 151,046 girl students who did not register in any schools, their names were not registered anywhere, and were not considered students at all."
In response to a question on the proportion of drop out of girl students in comparison to boys, Soltanian said, "A total of 4.23 per cent of students dropped out of school in the previous academic year. Girl students constituted 4.17 per cent of it, meaning that there is a big difference between girls’ and boys' drop outs."
Soltanian continued by stating that poverty in impoverished areas is among the reasons for drop out of girl students from school. He said, "Even in some parts of the destitute regions, they use children as labor force. Girls are more vulnerable relative to boys in these areas."
An administrative clerk in a village in Khuzestan province said, “About 50% of boys and almost all girls have no choice but to drop out of school because there are no middle schools here.” There are currently no girls’ high schools in the city of Hoveyzeh. Amongst the 40 villages in this region, there are no schools dedicated to girls, as a result of which the majority of girls have been compelled to leave their education.
The Director of Education in Kohgilouyeh and Boyer Ahmad Province has similarly announced, “Of those students who drop out, many are girls, who do so as a result of financial problems.” (The state-run Fars and Mehr news agencies, January 7, 2016)
Saravan’s deputy reported to a meeting in the Parliament on December 14, 2015, that “coed high-school classrooms and poverty” were among the main causes of girls dropping out in this region, also located in Sistan and Baluchestan Province, in southeastern Iran.
According to the state-run ANA news agency, girl children in the Herandi district of Tehran cannot continue their education due to the corrupt social atmosphere in that area, namely the large number of addicts and people who sleep on cardboard boxes in the streets. The girls cannot even leave their homes.
Shortage of resources leads to Iran’s nomad students dropping out of school. Mohammad Reza Seifi, director of the Office of Nomads’ Education, said this and added that between 46 to 50 per cent of nomad students drop out of school after finishing their elementary education.
He further said, “Factors such as living in distant places, severe cold, and lack of transportation to school, make education conditions extremely difficult for nomad girls especially in Sistan-o Baluchestan Province (southeastern Iran) and in some instances lead to the students dropping out of school. (The state-run Mizan news agency – January 28, 2018)

The official outlook on women’s education
The main contributor to women’s illiteracy, however, is the regime’s outlook on women. The mullahs believe that homemaking as well as bearing and raising children are the main responsibility of a woman.
“Having contacts with their husbands’ families has priority over all sorts of chemistry, physics and math formulas for girls,” Zahra Ayatollahi, head of Women’s Social and Cultural Council, told the regime’s Supreme Revolutionary Cultural Council. (The state-run daily newspaper of Qanoon, January 3, 2017)
In a 16-point decree issued on September 3, 2016, the mullahs' supreme leader Ali Khamenei set the general outlines of the regime's Family Policy for all government organs. The decree laid emphasis on the promotion of women's childbearing and housekeeping roles. (The state-run Tasnim news agency – September 3, 2016)
On June 21, 2017, Khamenei also opposed the UN 2030 Education Plan and said, “The 2030 document is part of the United Nations’ Sustainable Development Goals by which the world’s domineering powers want to control all nations in a deficient and erroneous move… Basically, why should we need to accept these documents and practically accept what the West gives us as model?”
The Iranian regime’s officials followed suit, describing the Education 2030 document as a “disgraceful” document “bearing a colonialist content” which manifests “one of the most bitter examples of infiltration” and promotes “educational transformation”, “elimination of sexual stereotypes”, “gender equality”, and “global citizenship”, causing grave “security” concerns.
On June 13, 2017, the Supreme Council of Cultural Revolution (SCCR) meeting presided by the mullahs’ president Hassan Rouhani decided to stop implementation of the agenda in education.
Such hysterical opposition to the Education 2003 Framework for Action and the Agenda 2030 by the clerical regime, is because the document obliges all state parties to observe gender equality and equal opportunities for all individuals which include women and girl children and thus target the heart of Iran’s ruling fundamentalist regime